The initiative is a joint effort between the United States Attorney’s Office for the District of New Jersey, the New Jersey Attorney General’s Office, the state’s 21 County Prosecutors, New Jersey State Police, and federal, state, and local law enforcement.

AG Directive 2021-10 establishes a statewide “Gun Violence Reduction Task Force” to lead reactive and proactive investigations and prosecute violent crimes that impact the lives and safety of residents, as well as a statewide intelligence network that will coordinate with the task force to implement mechanisms for immediate information sharing across agencies.

“Since becoming Acting Attorney General two months ago, I have met with dozens of law enforcement leaders across New Jersey who consistently stressed the need for greater coordination with county, state, and federal prosecutors to reduce gun violence,” said Acting Attorney General Bruck. “We all recognize that criminal prosecution alone will not end gun violence in New Jersey, but when prosecution is necessary, we must do so as effectively and efficiently as possible. The task force we are launching today demonstrates our commitment to working across all levels of government to keep the residents of New Jersey safe.”

“Our experience has shown that close cooperation among federal, state, and local law enforcement partners is the most effective way to combat violent crime,” said Acting U.S. Attorney for the District of New Jersey Rachael Honig.  “The U.S. Attorney’s Office is proud to participate in extending the Violent Crime Initiative model that it pioneered in New Jersey cities like Newark, Jersey City, and Camden to other municipalities statewide. We are grateful to Acting Attorney General Bruck and the New Jersey Attorney General’s Office for their shared commitment to protecting the safety of all New Jersey residents and the communities in which they live.”

“Our challenge is not just removing illegal firearms from our streets, but determining the source in order to prevent the senseless acts of violence that are often associated with these firearms. With the creation of this task force, we will be able to address these problems through precision policing, intelligence gathering and gaining access to information across a wide range of resources,” said Colonel Patrick J. Callahan, Superintendent of the New Jersey State Police. “We are committed to working with our law enforcement partners across the state in order combat gun violence and make our communities safer.”

“Intelligence sharing and collaboration are the key components to stopping gun violence in our communities,” said Director Lyndsay Ruotolo of the Division of Criminal Justice. “Through his Directive, Acting Attorney General Bruck has created a mechanism by which law enforcement across the state will work together to effectively reduce violence and make our state a safe and just for all residents.”

“Sharing information and intelligence by local, county, state, and federal agencies is key in effectively preventing and prosecuting the gun violence that disrupts communities across New Jersey,” said Hudson County Prosecutor Esther Suarez, President of the County Prosecutors Association of New Jersey. “This newly formed Gun Violence Task Force and statewide gun violence intelligence sharing network will expedite and bolster the work of law enforcement agencies throughout New Jersey’s 21 counties. We applaud Acting Attorney General Bruck and Acting U.S. Attorney Honig for their dedication to this issue and for implementing this partnership to reduce gun violence and make all of New Jersey’s communities safer.”

“This is an opportunity to expand beyond traditional policing strategies to reduce gun-related crimes and homicides in our neighborhoods and communities,” said Chief John Zebrowski, President of New Jersey State Association of Chiefs of Police. “The task-force represents a significant interdisciplinary commitment towards prevention and intervention of gun-related violence through an enhanced network of intelligence information sharing.”

The Gun Violence Reduction (GVR) Task Force will be organized into three regional teams – North, Central, and South – and will consist of federal, state, and county prosecutors working together to identify cases for investigation and prosecution. The regional teams will be supported by officers of the New Jersey State Police (NJSP) and will be physically based in the “Real-Time Crime Centers” that NJSP recently established in locations across the state.

Under AG Directive 2021-10, each of New Jersey’s more than 500 state, county, and local law enforcement agencies are required to designate an individual to serve as their liaison to the GVR Task Force, and will be responsible for serving as a single point of contact within their agency for coordinating requests for information and investigative assistance to and from the GVR Task Force. In addition, under AG Directive 2021-10, each of the 21 County Prosecutors are required to identify an Assistant Prosecutor who is responsible for supporting the GVR Task Force for cases arising in their jurisdiction.

The GVR Task Force model is based on the premise that a majority of gun violence incidents can be traced to a small group of individuals concentrated in specific areas – but that investigations into gun violence can span the entire state. As AG Directive 2021-10 notes, “A firearm trafficked into New Jersey through Salem County might wind up as the murder weapon in a Paterson homicide; a vehicle stolen in Ocean County might be used as the getaway car in a Trenton shooting. By improving information-sharing across agencies, we improve our ability to solve crimes and hold wrongdoers accountable throughout the Garden State.”

In recent months, federal, state, and county prosecutors have been collaborating on efforts to reduce gun violence across New Jersey. Over the past summer, law enforcement agencies and prosecutors have worked together to target the use of illegal firearm use, resulting in the following cases: 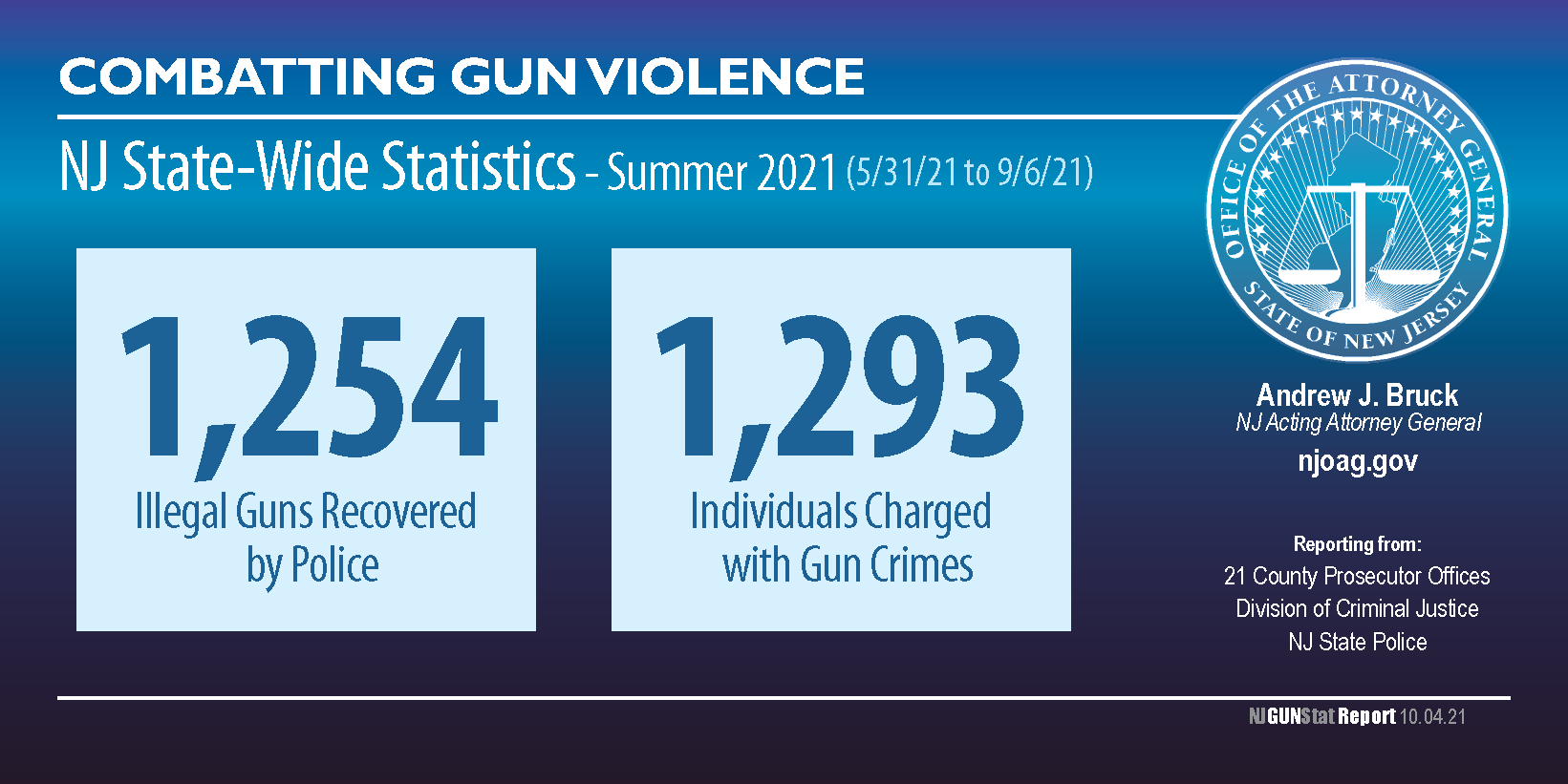 In New Jersey, Governor Phil Murphy and Acting AG Bruck are leading a comprehensive, statewide effort to reduce gun deaths, which pairs the latest evidence-based policing strategies with innovative, community-based prevention programs. The three-pronged approach to tackling this public health crisis includes addressing the root causes of violence; keeping guns away from those most likely to harm others; and taking swift action against those who break the law.  These efforts have included:

AG Directive 2021-10 can be viewed in full at
https://www.nj.gov/oag/dcj/agguide/directives/ag-Directive-2021-10_Establishing-Statewide-Gun-Violence-Reduction-Task-Force.pdf