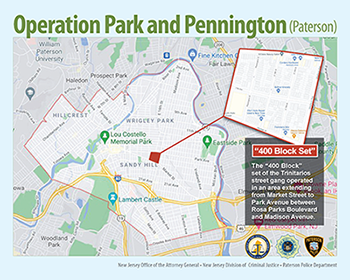 By arresting members of the “400 Block” set of the Trinitarios, the Attorney General’s Office and Paterson Police acted to halt the local gang’s violent conflicts with rival drug sets, which threatened a significant escalation in the city’s gang violence. Five handguns were seized—including a “community gun” shared by set members—along with nearly 800 rounds of ammunition and six large-capacity magazines, including a 50-round drum-type magazine and three 30-round magazines.

The arrests are the result of “Operation Park and Pennington,” an eight-month investigation by the Division of Criminal Justice Gangs & Organized Crime Bureau and the Paterson Police Department Narcotics Unit. Ten racketeering defendants were arrested beginning on Thursday, July 15, and four are being sought on arrest warrants.

Eric Polanco, 27, allegedly runs the drug set, and his closest associate, Joseph Landrau, 26, allegedly acts as the set’s “street boss.” Roberto Santiago, 60, allegedly is a cocaine supplier for the set. In addition to racketeering, those men are charged with first-degree promoting organized street crime, and face weapons charges related to the guns and large-capacity magazines that were seized.

Because of the large territory they control—which extends from Market Street to Park Avenue between Rosa Parks Boulevard and Madison Avenue—the 400 Block set allegedly has been involved in “gang wars” with rival drug sets. On June 20, 2021, Landrau was shot four times and severely wounded in a shooting believed to involve a rival gang. Two other defendants, Jussy Geraldino, 23, and Kreemlin Alcantara, 22, were fired upon but not hit on May 24, 2021.

After Landrau was shot, detectives listened through a tapped phone as Eric Polanco discussed violent retaliation with a rival.

In a conversation cited by the State at detention hearings yesterday, Polanco stated: “People want war, so we going to have war….”

“We’re going after those who fuel gun violence in Paterson and other New Jersey communities,” said Acting Attorney General Bruck. “By focusing our efforts on the criminal organizations and criminal activities that present the greatest threats to public safety, we intend to make our communities safe for the people of this state.”

“This operation is yet another example of our partnership with the Paterson Police Department, and demonstrates our commitment to the residents of this section of Paterson, who live with the daily threat of being caught in the crossfire of rival drug sets,” said Director Lyndsay V. Ruotolo of the Division of Criminal Justice. “We’ll continue to conduct these strategic investigations targeting the gangs, guns, and drugs that are undermining safety and security in too many of our neighborhoods.”

Paterson Public Safety Director Jerry Speziale said: “We appreciate our strong partnership in support of our common goal of dismantling this criminal enterprise, which will have a far-reaching impact in making a safer Paterson.”

The following 14 alleged members of the drug set have been charged with first-degree racketeering and third-degree conspiracy to distribute narcotics, including heroin, cocaine, opioid pills, and other drugs [*an asterisk indicates the defendant remains at large and is sought on an arrest warrant]:

Most defendants face additional second- or third-degree drug charges. A fifteenth defendant, Santiago’s son, Robert “Macho” Santiago, 24, of Paterson, N.J., is not charged with racketeering; he was arrested on drug charges only.

Gregory Polanco, Eric Polanco’s brother, faces second-degree charges of unlawful possession of a weapon and possession of a weapon for an unlawful purpose related to a “community” handgun he allegedly threw in a trash can when he believed police were following him. Eric Polanco, Gregory Polanco, and Landrau face a second-degree gun conspiracy charge in connection with another community handgun that Landrau allegedly carried to protect himself after he was shot on June 20.

During the course of the investigation and execution of search warrants, detectives seized 40 single-dose wax folds of heroin, over 5 ounces of powder cocaine, most of it packaged in single-dose bags for sale, 40 vials/bags of crack cocaine, 60 oxycodone pills, 22 Percocet pills, and 10 Xanax pills.

The Division of Criminal Justice conducted the investigation in partnership with the Paterson Police Department Narcotics Unit, under the leadership of Captain Bert Ribiero, Chief Ibrahim Baycora, and Public Safety Director Jerry Speziale.

This investigation is another step towards reducing gun violence in New Jersey, one of Acting Attorney General Bruck’s key priority areas. In addition to long-term enforcement actions, the Attorney General’s Office and local, state, and federal law enforcement partners are holding a series of gun buyback programs around the state this summer, as well as performing targeted sweeps of fugitives with outstanding arrest warrants for violent offenses, as part of a comprehensive strategy to combat gun violence.