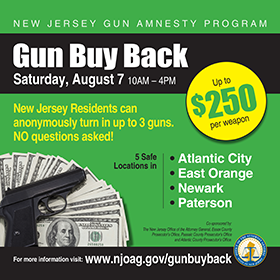 Residents can turn in firearms with “no questions asked,” and receive as much as $250 per weapon. Police officers will be stationed at each buyback location to collect and secure the guns. The gun buyback initiative is funded with forfeiture dollars obtained by the local police departments and County Prosecutors’ Offices, as well as forfeiture funds from the Division of Criminal Justice.

“We are taking every step possible to combat the rise in gun violence across our state,” said Governor Phil Murphy. “With this no questions asked gun buyback initiative, we hope to reach the communities that have been most devastated by gun violence. We are committed to building a safer future in New Jersey.”

“The rise in shootings across our country and throughout our state is deeply painful, and our Office is deploying all available tools to attack the problem from every possible angle,” said Acting Attorney General Bruck. “This buyback initiative is part of our broad-based, ongoing efforts to stop the violence in our communities and save lives by reducing the number of firearms in circulation. There are too many illegal guns on the street and too many people impacted by the trauma of gun violence, and I urge residents to help make their homes and their neighborhoods safer by participating in these gun buyback programs.”

“The gun buyback program is a piece of a comprehensive and cooperative law enforcement initiative that is committed to reducing gun violence statewide through enforcement, education, and community partnership,” said Colonel Patrick J. Callahan, Superintendent of the New Jersey State Police.

“Less guns on the street means less violence in our communities – it is as simple as that,” said Lyndsay V. Ruotolo, Director of the Division of Criminal Justice. “The gun buyback program is an opportunity for community members to actively participate in our violence reduction efforts, and we in law enforcement welcome their assistance.”

Statements of support from local leaders

“Reducing gun violence requires a comprehensive response,” said Paterson Police Director Jerry Speziale. “We need to take every action to get them off our streets.”

“The public should be assured that this Gun Buy Back Program has nothing to do with infringing on the rights of lawful gun owners,” said Acting Essex County Prosecutor Stephens. “To be clear, the key purpose of this initiative is to reduce the number of illegal and unwanted guns in households and prevent them from being used in a potentially dangerous manner. Fewer guns available will have a direct effect on making our streets safer.”

“The right to bear arms should be done with care and responsibility and in compliance with the law,” said Newark Mayor Ras Baraka. “However, we must get illegal and unwanted guns out of communities, specifically as we deal with a national rise in gun violence. Important initiatives like this gun buyback program coupled with alternative violence reduction initiatives will reduce the needless tragedies that guns can create and save countless lives. This is truly a collective effort with our state and county law enforcement partners, and key organizations. It is critical in removing dangerous weapons from homes and off our streets.”

“So far this year, Newark Police have removed nearly 400 illegal guns from our streets, as gun recoveries in Newark are up 63 percent year-to-date,” Newark Public Safety Director Brian O’Hara said. “Every gun taken off the street is potentially a life saved. And I am grateful to Attorney General Bruck for coordinating this much-needed program.”

“Every gun that we are able to get out of the wrong hands and off the streets is a win for everyone,” said East Orange Mayor Ted R. Green. “Public safety has always been my administration’s top priority and this gun buyback program means a safer city for our residents and our officers.”

“The detrimental effects of guns in our community continue to ripple at every level. For years, we have been working diligently with our law enforcement agencies and community partners to get guns off the street,” said EOPD Police Chief Phyllis Bindi. “This ‘Guns for Cash’ event is an aggressive step in the right direction and it’s absolutely a necessary component, in a broader plan, to ensure the safety of the people we protect and serve.”

“Atlantic County is very excited to be a part of this gun buyback program and thankful to the Governor and the Attorney General for their support,” said Acting Atlantic County Prosecutor Shill. “Far too many of our citizens’ lives are being lost and families ruined by the plague of gun violence. While there may not be a single catchall solution, this gun-buyback program represents a step down the path to a safer New Jersey.”

“My administration is proud to partner with Acting Attorney General Bruck to host a gun buyback event in Atlantic City,” said Mayor Marty Small, Sr. This event provides Atlantic City residents with an opportunity to be part of the change, to help get unwanted firearms off our streets – no questions asked – and ensure the safety of neighbors and loved ones.”

“We are committed to finding alternate ways to reduce the gun violence within our neighborhoods,” said James Sarkos, Interim-Officer-in Charge of the Atlantic City Police Department. “By hosting a gun buyback event, we are providing an opportunity for residents to cash in on any unwanted firearms they may have. The removal of these guns from our streets will reduce the chance that they fall into the wrong hands and are used to bring devastation to our community.”

In addition to publicizing the August 7 gun buyback initiative through today’s press conference, the events will also be promoted through social media, local advertising, and through community and faith-based outreach.

In New Jersey, Governor Phil Murphy and Acting AG Bruck are leading a comprehensive, statewide effort to reduce gun deaths, which pairs the latest evidence-based policing strategies with innovative, community-based prevention programs. The three-pronged approach to tackling this public health crisis includes addressing the root causes of violence; keeping guns away from those most likely to harm others; and taking swift action against those who break the law.

Residents with questions about the buyback effort can call the Attorney General’s Office of Constituent Services at (609) 984-5828 or visit www.njoag.gov/gunbuyback/