“For the first time, we’re seeing numbers that appear to indicate we are holding the line in our fight to end the opioid crisis, and that’s encouraging,” said Attorney General Grewal. “But experience tells us that addiction is a relentless disease and recovery is not a linear process. We cannot assume we have turned a corner in this battle. We must continue to attack the addiction crisis from all sides, using prevention, treatment, and enforcement as means to defeat this deadly epidemic.”

During the round table meeting, which was held at the Family Guidance Center of Warren County, Attorney General Grewal highlighted addiction-fighting programs and initiatives undertaken by the Department of Law and Public Safety in 2019.

Over the course of the year, Attorney General Grewal continued to advance New Jersey’s fight to end the opioid epidemic through a series of initiatives and actions that focused on prevention, enforcement, and treatment. This work was coordinated by the Office of the New Jersey Coordinator for Addiction Responses & Enforcement Strategies (NJ CARES).

As the State’s chief law enforcement officer, the Attorney General worked to end the trafficking of dangerous drugs like heroin and fentanyl. Under the supervision of the New Jersey State Police, the Attorney General’s Opioid Enforcement Task Force dismantled 11 heroin “mills” in 2019, four of which were collectively linked to heroin stamps associated with 358 overdoses, including 133 fatalities.

In 2019, the Attorney General also continued his efforts to hold accountable those most responsible for fueling the opioid crisis, filing a civil lawsuit against eight members of the Sackler Family, owners of Purdue Pharma, which manufactures OxyContin and other prescription opioids blamed for the addiction epidemic. The lawsuit, which followed a 2017 suit against Purdue Pharma,  sought to ensure that individuals – and not just corporate entities – would be held accountable for their role in the fueling the opioid crisis.

At the same time, the Attorney General worked to prevent the abuse and diversion of prescription opioids by taking action against doctors, pharmacists, and other health practitioners who allegedly prescribed them without a sound medical basis. In all, 26 physicians saw their licenses revoked, suspended, or otherwise restricted last year for allegedly allowing dangerously addictive drugs to flow unchecked into communities.

Among the doctors who permanently lost their practicing privileges last year were Dr. Alan Faustino and Dr. George Beecher. Faustino, a family practitioner Absecon, lost his license in March 019 selling prescriptions to individuals he never treated.  Beecher, an ear, nose and throat specialist in Warren, saw his license permanently revoked after he was convicted of writing prescriptions for tens of thousands of 30 mg oxycodone pills in the names of people he never examined, treated, or even met, as part of a drug trafficking ring.

In working to stop addiction before it starts, the Attorney General partnered with the New Jersey State Interscholastic Athletic Association (“NJSIAA”) to produce a video to educate student athletes on the dangers of opioids and to offer alternative responses to sports-related injuries. The 6-minute “Athletes vs Opioids” video, which features interviews with professional athletes, is now required viewing for the 16,000 students who participate in NJSIAA sports programs statewide, and the parents of student athletes under the age of 18. 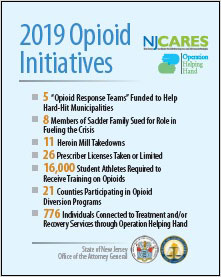