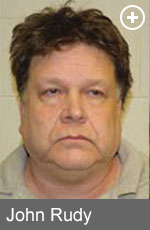 The state presented testimony and evidence that Rudy knowingly used file-sharing software to make more than 25 items of child pornography readily available for any other user to download from a shared folder on his computer. While monitoring a peer-to-peer file-sharing network popular with sex offenders, a detective of the New Jersey State Police DTIU downloaded more than 50 items of child pornography from a shared folder at a computer IP address that was subsequently traced to Rudy. Rudy was arrested on June 9, 2016 when members of the DTIU, assisted by the Hunterdon County Prosecutor’s Office and the Raritan Township Police Department, executed a search warrant at his home and seized numerous devices, including a desktop computer, 97 flash drives, and eight SD cards. Forensic examinations revealed that all of the flash drives and SD cards that were functional (all but 10 devices) contained some child pornography and one contained over 100 items of child pornography.

“By sharing child pornography online, this defendant participated in a criminal network that promotes and perpetuates the brutal sexual exploitation of children,” said Attorney General Grewal. “Our multi-agency efforts to patrol the internet and put these offenders in prison reflect our commitment to protect children and ensure justice for those who have been victimized. I commend our attorneys and trial team, as well as all of the detectives and investigators who helped secure this verdict.”

“We will continue to work with the State Police and law enforcement at all levels to disrupt the online market for these vile materials and send those who distribute them to prison,” said Director Veronica Allende of the Division of Criminal Justice. “We are sending a loud and clear message that those who commit these crimes will face serious consequences.”

“The criminals who operate these file-sharing networks online depicting child pornography are no less dangerous than those who peddle narcotics on the street. Their enterprise thrives on the pain and suffering of the victims and their families, and their deplorable behavior is a scourge on society,” said Colonel Patrick Callahan of the New Jersey State Police. “We will continue to lead the charge against those who target our children by working cooperatively with our federal, state and local partners, whose collective resolve to bring child predators to justice is unwavering.”

Operation Statewide was a 2016 multi-agency child pornography sweep coordinated by the New Jersey State Police, as lead agency for the New Jersey ICAC Task Force, which led to arrests of 40 men in 2016, including defendants in every county of New Jersey. During the operation, investigators linked all of the defendants to alleged use of the internet to download and distribute child pornography. Peer to Peer, or P2P, file sharing networks play a major role in the distribution of child pornography. There is a large library of images and videos known to law enforcement, and these electronic files can be traced in various ways on the internet. Detectives downloaded child pornography that the defendants allegedly offered from their computers on P2P networks, tracing the files to their origin locations.

The file-sharing networks used by offenders to distribute child pornography operate in the same manner as websites used for privately sharing music or movies. Those in possession of the illegal images can make them available on computers that they control for others to download. Because many of these videos and photos of child pornography keep recirculating, they result in the perpetual re-victimization of the children who were sexually assaulted or abused to produce them.

Attorney General Grewal commended the attorneys and staff in the Division of Criminal Justice Financial & Cyber Crimes Bureau who prosecuted Rudy, as well as all members of the New Jersey State Police DTIU and other agencies in the ICAC Task Force who conducted Operation Statewide, including the Hunterdon County Prosecutor’s Office and Raritan Township Police Department.

Attorney General Grewal and Director Allende urged anyone with information about the distribution of child pornography on the internet – or about suspected improper contact by unknown persons communicating with children via the internet or possible exploitation or sexual abuse of children – to contact the New Jersey Internet Crimes Against Children Task Force Tipline at 888-648-6007.