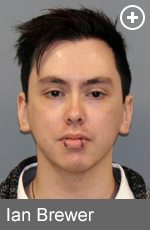 TRENTON – Attorney General Gurbir S. Grewal announced that a California man was sentenced to state prison today for traveling to New Jersey in an attempt to sexually assault an underage girl. He communicated online with a man he believed was offering him an opportunity to sexually assault a girl, age 11, but that man was really an undercover detective of the New Jersey State Police.

Ian Brewer, 25, of Pomona, Calif., was sentenced today to seven years in state prison by Superior Court Judge Regina Caulfield in Union County. He pleaded guilty on Aug. 27, 2020 to an accusation charging him with second-degree attempted aggravated sexual assault. He will be required to register as a sex offender under Megan’s Law and will be subject to parole supervision for life.

Brewer began exchanging emails in December 2019 with the undercover detective. The undercover detective said that for a fee, Brewer could sexually assault the 11-year-old daughter of his girlfriend. The detective represented that he and his girlfriend were part of a group that met regularly to sexually assault the child. Brewer agreed to pay a fee of $500 for the weekend to have the girl perform oral sex on him. He was arrested on Jan. 17, 2020 after flying to New Jersey and checking into a hotel room. He was arrested at a restaurant in Elizabeth, N.J., where he went to meet the man and his girlfriend. Brewer had $701 cash in his possession, and numerous condoms were found in his hotel room.

“Through these collaborative operations involving the ICAC Task Force, we are working ceaselessly to arrest child predators like Brewer before they can sexually assault young victims,” said Attorney General Grewal.“ At the same time, we urge parents, guardians and teachers to warn children about the threats that exist on social media and gaming sites and watch for signs that a child has been subjected to online abuse. Online threats to children have increased as much as 50 percent in New Jersey since the start of the COVID pandemic, as gauged by tips to law enforcement, and the need for vigilance has grown this fall as children log more hours of screen time for virtual learning.”

“By working with the ICAC Task Force and partnering with law enforcement at all levels, including U.S. Homeland Security Investigations, we ensure that we have the resources and reach to pursue these multi-jurisdictional cases and capture those who seek to sexually abuse and exploit children,” said Director Veronica Allende of the Division of Criminal Justice. “We want these offenders to know that when they seek out like-minded individuals online, they may instead discover our detectives, with their single-minded goal of protecting children.”

“Gone are the days when child predators were limited to lurking in neighborhoods or playgrounds. Brewer is an example of how today’s predators are not only using more sophisticated technologies, but are networking with other abusers in order to find their next victim,” said Colonel Patrick J. Callahan, Superintendent of the New Jersey State Police. “The New Jersey State Police and our partners will continue to evolve our investigative strategies and work together to ensure that child predators and those who assist them are identified, apprehended, and prosecuted to the fullest extent of the law.”

“Once again, we confront the tenacious evil of a child predator, in this case one who traveled from California to New Jersey to seek out his innocent prey,” said Jason J. Molina, Special Agent in Charge, Homeland Security Investigations, Newark. “However, when he arrived at the designated meeting place, he found law enforcement officers there instead who arrested him. This should be a strong lesson to child predators online, that what you think are well crafted schemes to lure in the most vulnerable among us are being undone by the combined forces of law enforcement agencies nationwide. If you’re out there, we will find you and bring you to justice, no matter what it takes. A dangerous predator has been removed from our community thanks to the combined efforts of law enforcement.”

Attorney General Grewal thanked all of those who investigated and prosecuted the case for the New Jersey State Police, U.S. Homeland Security Investigations, the Bayonne Police Department, and the Division of Criminal Justice.

Attorney General Grewal and Director Allende urged anyone with information about the distribution of child sexual abuse materials on the internet – or about suspected improper contact by unknown persons communicating with children via the internet or possible exploitation or sexual abuse of children – to please contact the New Jersey Internet Crimes Against Children Task Force Tipline at 888-648-6007.