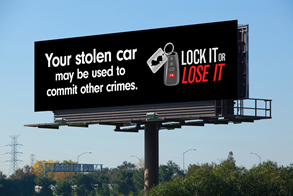 TRENTON – With thefts of high-end vehicles on the rise statewide, Attorney General Gurbir S. Grewal and the Office of the Insurance Fraud Prosecutor (OIFP) today announced the launch of a “Lock It or Lose It” public awareness campaign aimed at discouraging New Jerseyans from leaving their cars unlocked with the key fob inside.

The initiative, which closes Insurance Fraud Awareness Month, seeks to counter the steady increase in luxury vehicle thefts that cost the insurance industry billions of dollars each year nationwide in claim payouts and investigative costs, and give rise to insurance fraud and other crimes.

The new campaign’s “Lock It or Lose It” slogan will begin appearing Monday in ads running on billboards, radio, and on cable television stations across New Jersey, along with a warning that stolen cars may be used to commit more serious crimes.

“Auto theft isn’t just for joyriding anymore. It could be a critical first step in the commission of much more serious crimes like murder and robbery,” said Attorney General Grewal. “We want people to realize that carelessly leaving their key fobs in their unlocked cars or leaving their cars running and unattended is an open invitation to car thieves who need a vehicle to carry out their criminal agenda.”

Concerns about the criminal domino effect of stolen cars come at a time when auto thefts in general are trending downward in the state, but thefts of high-end vehicles – loosely defined as less than five years’ old with a sticker price of $50,000 and up, are rising.

Statistics compiled by the New Jersey State Police show that from January through September of 2020, a total of 7,131 autos were reported stolen statewide, 4.4% fewer than reported during the same period in 2019. However, high-end auto thefts climbed 7.5 % to 1,501.

It is a trend being played out across the country. According to the National Insurance Crime Bureau (NICB) while national vehicle thefts have enjoyed a steady decline for the last three years, the number of vehicles stolen with keys or fobs left inside has been increasing some 10% each year.

According to the National Highway Traffic Safety Administration, between 40 and 50% of vehicle theft is due to driver error, which includes leaving vehicle doors unlocked and leaving keys or fobs inside.

While hard and fast statistics are not available, it is estimated that nearly all high-end thefts in the state involve vehicles that were left running unattended or unlocked with the key fob inside.

“Ironically, car thieves are stealing vehicles that are equipped with advanced anti-theft technology, but that technology is rendered useless when owners make the decision to leave key fobs inside their cars.  This careless behavior encourages criminals to look for easy targets,” said Colonel Patrick J. Callahan, Superintendent of the New Jersey State Police. “The consequences of car theft are multifaceted.  Stolen vehicles are often used in the commission of crimes, and the astronomical costs to insurance companies affect the insurance premiums of policyholders. A vast amount of car thefts can be avoided by simply locking your vehicles and keeping fobs in a safe location.”

More than $6 billion was lost nationwide to motor vehicle thefts in 2019, requiring insurance companies to pay out large sums of money, costs they pass on to all of their policy holders.

“From the minute a car is reported stolen, the meter starts ticking for insurance companies whose first order of business is to conduct an investigation to determine that the claim is legitimate and not an attempt to illegally obtain a payout through fraud,” said Acting Insurance Fraud Prosecutor Thompson. “And any injuries or damages a car thief causes to people or property after driving off with your stolen car is likely to be borne by insurance providers, which translates to higher premiums for you. That’s something to consider before leaving your car unlocked and vulnerable to car thieves. Are you willing to pay the price?”

Stolen vehicles are used in the commission of untold crimes of violence in our state each year, but their involvement is often relegated to a footnote in news articles, or left unmentioned altogether.

But a growing number of law enforcement agencies want to change that.

Forward-thinking police departments, including those in New Jersey, are beginning to document the link between vehicle theft and violent crime. The evidence being collected is expected to confirm what many in law enforcement can already surmise from anecdotes – that stolen cars and violent crime go hand-in-hand.

“As director of Newark’s Department of Public Safety, I have encouraged our residents at community meetings and through social media to not leave their cars running unattended because the risk of them being a victim increases when they park near convenience stores, gas stations, vacant lots and in their driveways,” said Newark Police Director Anthony F. Ambrose. “Please make sure your car is turned off and locked before you leave your vehicle. Last year, 25 percent of the cars stolen in the city were left running and unattended.”

“While it might be seem harmless to leave your fob or keys in your vehicle, the truth is that you are giving an open invitation to car thieves,” said Paramus Police Chief Kenneth R. Ehrenberg. “Many of these stolen cars are later involved in robberies, homicides and police pursuits which put innocent lives at risk. By taking your fobs and locking your doors you can do your part to help prevent these crimes and help keep our communities safer.”

A key mission of the Lock It or Lose It campaign is to get New Jerseyans to recognize that vehicle theft is a gateway crime to more serious criminal activity. By locking their cars and keeping the key fobs with them at all times, New Jersey residents can prevent the next crime spree from happening, reducing the risks to our law enforcement officers and preventing the unnecessary loss of innocent lives.

Acting Insurance Fraud Prosecutor Thompson noted that some important cases have started with anonymous tips. People who are concerned about insurance cheating and have information about a fraud can report it anonymously by calling the toll-free hotline at 1-877-55-FRAUD, or visiting the Web site at www.njinsurancefraud.org. State regulations permit a reward to be paid to an eligible person who provides information that leads to a conviction for insurance fraud.