Youth Bias Task Force Calls for Sweeping Changes to Fight Systemic Racism and Discrimination, As New Report Shows Spike in Bias Incidents in 2019 Nearly 1,000 Bias Incidents Were Reported in NJ in 2019, Up 75% from 2018; Task Force Recommends Mandatory Anti-Bias Education and Other Groundbreaking Reforms

Youth Bias Task Force Calls for Sweeping Changes to Fight Systemic Racism and Discrimination, As New Report Shows Spike in Bias Incidents in 2019 Nearly 1,000 Bias Incidents Were Reported in NJ in 2019, Up 75% from 2018; Task Force Recommends Mandatory Anti-Bias Education and Other Groundbreaking Reforms 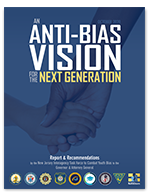 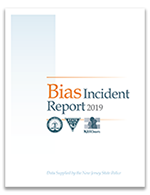 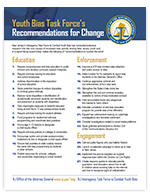 To counteract these deeply rooted sources of discrimination, the report calls for an array of transformative recommendations, including:

By implementing the report’s recommendations, New Jersey can realize a “new vision” for the state, as a model of diversity and tolerance for the rest of the nation to follow.

There were nearly 1,000 reported bias incidents across the state in 2019 – a 75 percent increase over the prior year. The increase was capped by a hate-fueled attack in Jersey City that ended in a shootout at a Kosher grocery store and left four people dead, including a police officer. Social media posts and a note left behind by the attackers made plain that the killings were motivated by hate.

“The unacceptable rise in discriminatory incidents targeting our youth cuts against our New Jersey values of inclusion, respect, and equality,” said Governor Phil Murphy. “My Administration will deliver on the sweeping recommendations of this report to set the bar high for future generations, repudiate discrimination in all forms, and reaffirm that hate has no home in New Jersey.”

“Hate has been brought out of hiding over the past few years across the nation, and the troubling—though unfortunately unsurprising—result has been a spike in bias incidents, particularly among young people,” said Attorney General Grewal. “New Jersey’s diversity is its strength, and no young person should ever feel like they don’t belong in the halls of their school or in their community. Today’s Task Force report breaks down why this bias persists, but also points us toward a better future—a future where we reject hate and embody the values of tolerance and inclusion that make our State so vibrant.”

“We can’t turn away from the role our institutions and systems play in teaching and perpetuating bias. Indeed, part of how we got here is by failing to address the ways in which many of the institutions that shape our country have a long legacy of excluding, oppressing, and degrading people of color, religious minorities, immigrants, women, LGBTQ+ people, and people with disabilities,” said Task Force Chair Rachel Wainer Apter.“With COVID-19 continuing to lay bare unacceptable inequalities, and protests around the country demanding racial justice, the recommendations in this Report are an important first step in responding to this historic moment with efforts to build a more equitable New Jersey for all.”

“Bias intimidation can cause emotional damage in children, which can often manifest into depression, low self-esteem, and substance abuse in adulthood. New Jersey prides itself on being one of the most diverse states in the country and there is no room for hatred in our communities or education institutions,” said New Jersey State Police Superintendent Colonel Patrick J. Callahan. “Every child and young adult in New Jersey has a right to a safe and bias-free learning environment, and we are committed to working with our partners to ensure that those who propagate intolerance, prejudice, and hate are held accountable.”

“During this time of heightened tensions and uncertainty, we recognize the pivotal role that students play in our state’s future. New Jersey is home to a diverse set of students and we remain committed to fulfilling the promise in our state higher education plan, which ensures all learners—regardless of their background, have a healthy, safe, and inclusive learning environment,” said Interim Secretary of Higher Education Diana Gonzalez. “I look forward to the ongoing work of the Interagency Task Force in ensuring all New Jerseyans can live free of hate and bias.”

“The Department is committed to fostering the positive development of students by eradicating hate, bias, and intolerance in the educational setting,” said Interim Education Commissioner Kevin Dehmer. “Educators throughout New Jersey have worked hard to ensure students are provided a safe and supportive learning environment, and we share the understanding that there is still more work to be done in the fight to combat youth bias.”

The 27 recommendations in the Youth Bias Task Force report issued today are intended as a “call to action” for a wide array of stakeholders — including lawmakers, state government agencies, the public and private education communities, law enforcement, juvenile justice officials, public figures, parents, and students.

In preparing its findings and recommendations, the Task Force undertook months of extensive research and outreach to community stakeholders in reaching its conclusions. The panel hosted five statewide public listening sessions attended by hundreds of New Jerseyans in New Brunswick, Toms River, Bridgeton, Hackensack, and Trenton; accepted written comments from the public; and had numerous direct conversations with dozens of community leaders and advocates across the state.

Illustrating the types of bias-related incidents that occur in New Jersey, the task force notes reports of New Jersey students posting racist videos on the social media platform TikTok, a swastika found etched in a classroom wall, a noose found hanging in a high school bathroom, and a restaurant vandalized with the words “Go Home China COVID-19.”

One of the report’s overarching findings is that bias, prejudice, and stereotyping are learned and can be unlearned.

Many members of the public “implored the Task Force to look beyond hateful words to address the systemic biases that inflict daily harm on our students and young adults.” In response, the Youth Bias Task Force took inventory of existing state programs and determined there is “no state program that provides comprehensive anti-bias education to New Jersey’s children, and no state requirement that New Jersey teachers receive such training.”

Against that backdrop, the report describes the task force’s two most critical recommendations as (1) enacting legislation to require comprehensive anti-bias education for students in public schools, and developing curricula support materials through the state Department of Education; and (2) requiring anti-bias training for all public educators and school employees, including training on implicit bias, institutional bias and structural bias. These two recommendations were “raised at every community listening session, and their importance was reiterated to the Task Force in numerous follow-up conversations with stakeholders.”

The Task Force report breaks down its 25 additional recommendations into three categories: (1) Education, (2) Public Engagement, and (3) Enforcement of Criminal and Civil Laws.

Within the Education category, Task Force recommendations include executive action to address racial disparities in school discipline, criminal justice referrals, and the identification of both academically advanced students and students with disabilities. It also calls for state funding of student-led anti-bias programming, requiring anti-bias training for student-athletes, and encouraging school districts and institutions of higher learning to designate or hire a Chief Equity Officer, among other recommendations.

In the Public Engagement category, the recommendations include launching a statewide campaign to stand up to hate in New Jersey and creating resource guides to educate parents, guardians and educators on how to talk with children about avoiding hate on the internet, as well as how to recognize the signs of radicalization. Also included is a recommendation to implement the plan to establish an incident response team within the Division on Civil Rights, which Governor Murphy and Attorney General Grewal announced in June as part of a package of measures to strengthen police-community relations.

The 2019 Bias Incident Report, also issued today, states that 994 bias incidents were reported in New Jersey last year—the highest annual total since the State began reporting bias incident data more than 25 years ago. This total reflects a 75 percent jump from the number of bias incidents reported in 2018 (569)—the largest-ever year-over-year increase in reported bias incidents during that period.

Amplifying the importance of the Youth Bias Task Force’s recommendations, the Bias Incident Report revealed that more than half (56 percent) of known bias offenders in New Jersey in 2019 were age 25 or younger. In addition, nearly half of those (about 46 percent) were age 17 or under.

The latest bias incident report compiles reports submitted to the New Jersey Uniform Crime Reporting System regarding incidents in 2019 by every law enforcement agency in the state.

“These statistics illustrate that young people are inextricably connected with the rise in hate” in New Jersey, the 2019 Bias Incident Report notes. “Implementing the recommendations in the report of the Youth Bias Task Force will be a vital first step toward reversing this troubling trend.”

As part of the Youth Bias Task Force’s ongoing mission, the Task Force and Attorney General Grewal will host a Virtual Summit on October 27 centered on the Task Force report, the issues it has raised, the recommendations for change it contains, and other concerns related to race relations and bias activity in New Jersey.

Persons wishing to attend the Virtual Summit can do so by registering at:
https://register.gotowebinar.com/register/2002968647829272331

DCR is the state agency responsible for preventing and eliminating discrimination and bias-based harassment in employment, housing, and places of public accommodation (e.g., places open to the public like schools, businesses, hospitals, etc.) by enforcing the New Jersey Law Against Discrimination (LAD) and the New Jersey Family Leave Act.