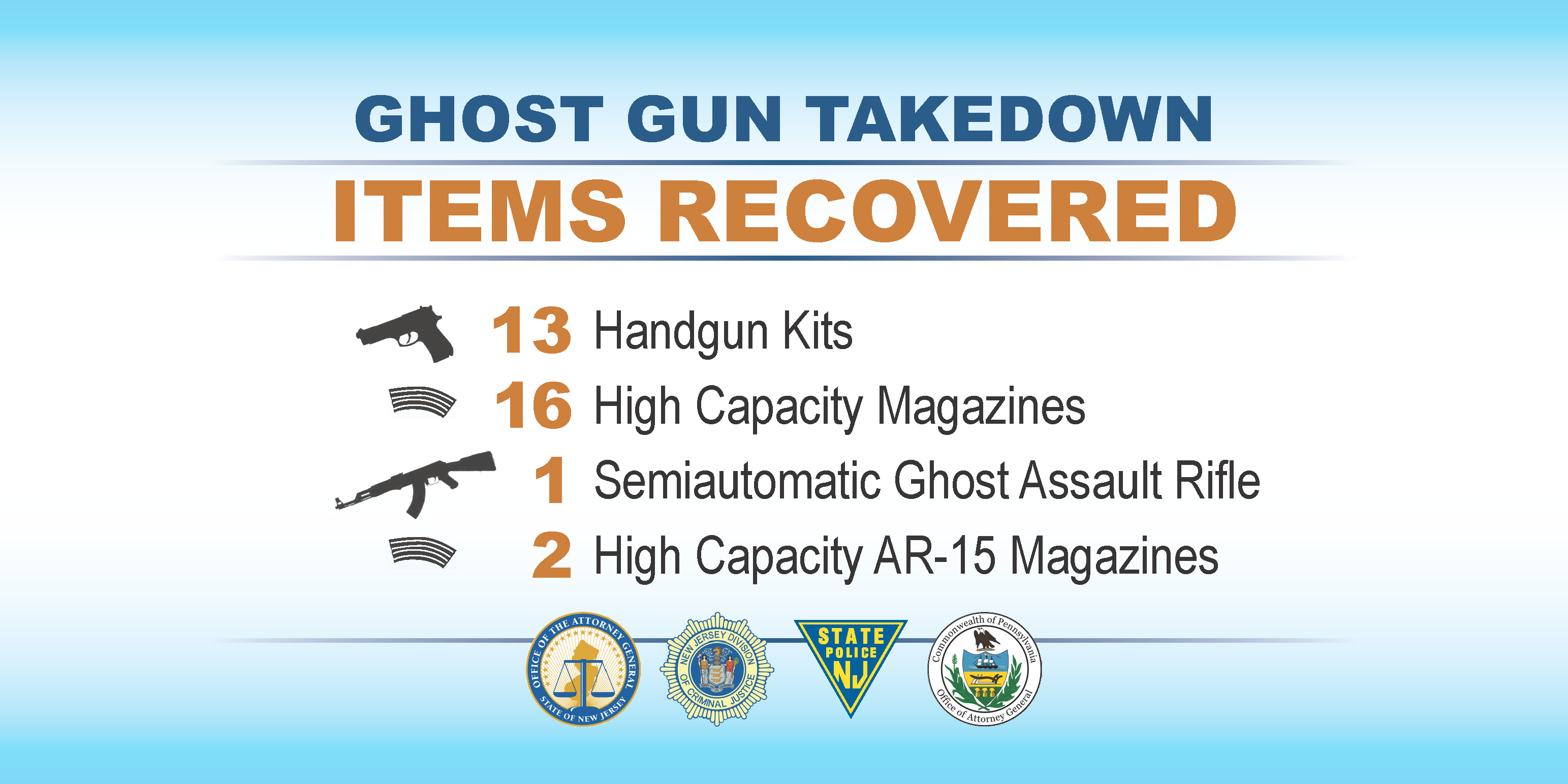 “Our message to gun traffickers is clear: if you bring illegal firearms into our state, we will prosecute you to the fullest extent of the law,” said Acting Attorney General Bruck. “We are committed to shutting down the pipeline of illegal firearms into New Jersey, especially the untraceable ‘ghost guns’ that are quickly becoming a favorite of criminals. I am especially grateful to the Pennsylvania Attorney General’s Office for their partnership in this investigation, and thank Attorney General Shapiro for his leadership on this important public safety issue.”

“These guns are a danger to public safety, and everyone in law enforcement is committed to stopping this violence and stopping criminals from getting their hands on these weapons of war,” said Pennsylvania Attorney General Shapiro. “This case also underscores the need for new laws, both at the federal level and especially in Pennsylvania, to stop the flow of ghost guns into the hands of people looking to do harm in our communities.”

“Collaboration with our law enforcement partners extends far beyond state lines, which is the key to preventing these illegal firearms from reaching our neighborhoods along with the violence that is often associated with them,” said Colonel Patrick J. Callahan, Superintendent of the New Jersey State Police. “Our goals align with our counterparts in Pennsylvania which is to stop the manufacture, import, assembly, and sale of ghost guns across all jurisdictions and to hold those accountable who attempt to perpetrate these crimes.”

“This indictment would not be possible without the collaboration between law enforcement from neighboring states,” said Director Lyndsay V. Ruotolo of the Division of Criminal Justice. “We will continue to work together in order to stop the flow of dangerous weapons into our state, reduce gun violence, and hold those who break the law accountable.”

On September 11, 2021, Pillus allegedly purchased over a dozen handgun kits from a gun show in Allentown, Pennsylvania. After leaving Pennsylvania, the defendant’s vehicle was observed proceeding to a Home Depot in Totowa, New Jersey, where Pillus was identified as the driver and Sweeney was identified as a passenger by New Jersey State Police and Pennsylvania Attorney General’s Office personnel.

As a result of this investigation, the following items were seized from Pillus’s vehicle, as well as his Morris County residence:

Sweeney accompanied Pillus to the Pennsylvania gun show and back into the State of New Jersey, and was observed storing items purchased there in the cargo area of their vehicle. She is charged with one count of fourth-degree possession of a large capacity ammunition magazine, in connection with the two 35 round magazines and fourteen twelve round magazines recovered from the vehicle.

Further investigation revealed Pillus previously purchased the parts and components of an assault firearm from a Pennsylvania gun show and transported said parts into the State of New Jersey, where he allegedly built an untraceable AR-15 style rifle, also known as a “ghost gun,” that was seized from his residence on September 11, 2021.

Pillus allegedly learned to build firearms from kits watching videos on YouTube, and intended to manufacture firearms in New Jersey, without the serial numbers mandated by state and federal law to allow law enforcement to trace the weapons, from the kits he purchased at the Pennsylvania gun show. The defendant allegedly intended to sell some of the handguns he would assemble from the kits purchased at the gun show.

“Ghost guns” or “privately made firearms” are not imprinted with a serial number registered with a federally licensed manufacturer, making it difficult for law enforcement to trace and because these weapons are typically covertly assembled and sold by private citizens, there is no legal background check or mechanism to keep ghost guns out of the hands of those who should not have access to them. In November 2018, Governor Murphy signed a law that makes it a crime to purchase parts to manufacture or distribute information to print ghost guns in New Jersey, and in 2019, the law was enhanced to make it a crime to transport, ship, sell, or dispose of ghost guns.  In the past year alone (October 20, 2020 to October 20, 2021), law enforcement agencies recovered over 200 illegal ghost guns in New Jersey. In March 2021, New Jersey announced a first-of-its-kind settlement with a ghost gun company that the Attorney General and New Jersey Division of Consumer Affairs sued over the company’s advertising and marketing of ghost guns to New Jersey residents and delivery of an assault firearms kit to a New Jersey buyer. The March 2019 lawsuit against James Tromblee Jr., d/b/a U.S. Patriot Armory, also was the country’s first such lawsuit against a ghost gun distributor.

Acting Attorney General Bruck thanked the following partners for their work on the investigation:

In 2020, the New Jersey and Pennsylvania Offices of Attorney General announced a partnership— the “PA/NJ Gun Trafficking Initiative”—to interdict interstate gun trafficking and solve gun crimes. The initiative built on intelligence-sharing efforts by the Camden Violent Crime Initiative and the Philadelphia Gun Violence Task Force, which continue in full force in their respective cities.

This investigation is another step towards reducing gun violence in New Jersey, one of Acting Attorney General Bruck’s key priority areas. In addition to long-term enforcement actions, the Attorney General’s Office and local, state, and federal law enforcement partners are establishing a statewide gun violence task force, holding a series of gun buyback programs around the state, as well as performing targeted sweeps of fugitives with outstanding arrest warrants for violent offenses, as part of a comprehensive strategy to combat gun violence.