New Jersey is home to some of the finest law enforcement officers in the country. In fall 2019, Attorney General Gurbir Grewal issued a comprehensive package of policy initiatives designed to reinforce and clarify the Garden State’s commitment to excellence in policing. These statewide reforms are intended to promote the culture of professionalism, accountability, and transparency that are hallmarks of New Jersey’s best law enforcement agencies. Through Attorney General Grewal’s “Excellence in Policing Initiative,” the state is building a national model for strengthening trust between law enforcement officers and the communities they serve.

END_OF_DOCUMENT_TOKEN_TO_BE_REPLACED 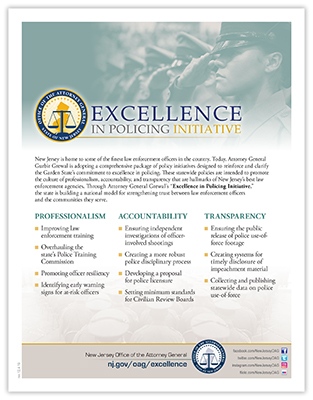 There are few investigations more important—or more challenging—than those involving the use of force by law enforcement officers against civilians. In December 2019, Attorney General Grewal issued AG Directive 2019-4, known as the Independent Prosecutor Directive, to outline clear procedures governing such investigations and to ensure that they are done fully, fairly, and independently of any potential bias.

Broadly speaking, the Directive outlines a ten-step process for conducting independent investigations of use-of-force and death-in-custody incidents in compliance with State law. Although the precise timing will vary depending on the case, the first three steps generally occur simultaneously in the immediate aftermath of the incident, while the remaining steps unfold over the course of the investigation.