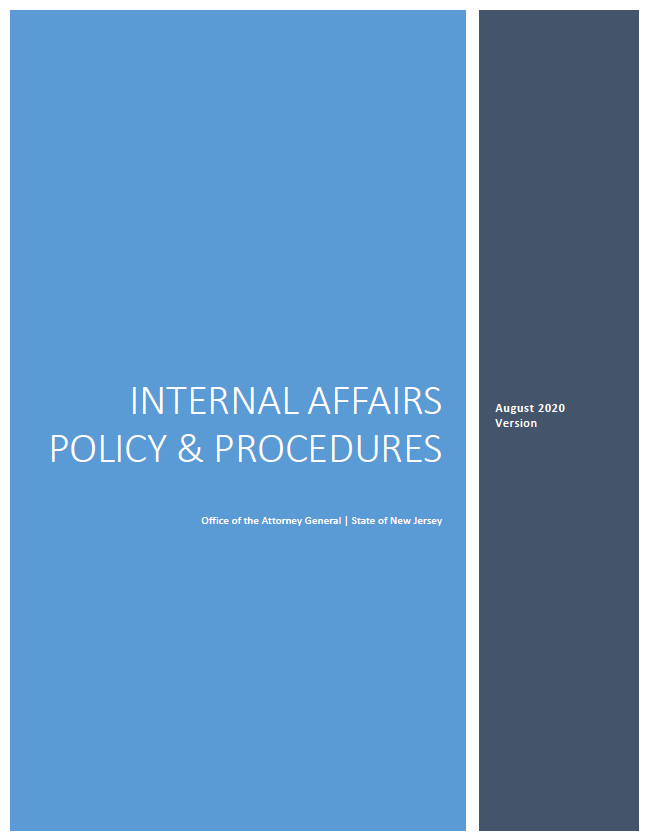 In New Jersey, every state, county, and local law enforcement agency is required to establish a process for disciplining officers who commit misconduct or otherwise violate the agency’s rules. Generally speaking, this disciplinary process is handled by the agency’s “internal affairs” (IA) unit, which operates outside the normal chain of command and is responsible for investigating misconduct and recommending discipline to the agency’s leaders.

In 1991, the Attorney General issued Internal Affairs Policies & Procedures (IAPP), which established statewide standards for the operations of IA units in New Jersey. Five years later, in 1996, the Legislature went a step further, requiring that each law enforcement agency in New Jersey adopt its own policies consistent with IAPP. The document has been updated several times since then, including a significant revision in December 2019 as part of Attorney General Grewal’s Excellence in Policing Initiative. Several additional changes were made in subsequent years.

The current version of IAPP, which went into effect on December 21, 2021, is known as the “December 2021 IAPP” and includes an appendix of fourteen sample forms and documents. The first two of these sample forms are intended for public use: a “civilian complaint information sheet,” which explains how to file an IA complaint (Appendix A), and a standardized “internal affairs report form” for civilians seeking to file a complaint (Appendix B). Both of these documents have been translated into Arabic, Chinese, Haitian, Hindi, Korean, Polish, Portuguese, Spanish, Tagalog, and Vietnamese. The remaining appendices (Appendix C to Appendix N) are intended for internal use by law enforcement.

Pursuant to AG Directive 2021-6, all New Jersey law enforcement agencies were required to submit to the Attorney General their first “Major Discipline Reporting Form,” which covers discipline imposed between June 15, 2020 and December 31, 2020, no later than August 9, 2021. If this information has yet to be submitted, agencies must submit their information to the Office of the Attorney General using the link below.

To download a copy of the Major Discipline Reporting Form, scroll down to “Additional IAPP Appendices” and download the link listed as Appendix L.