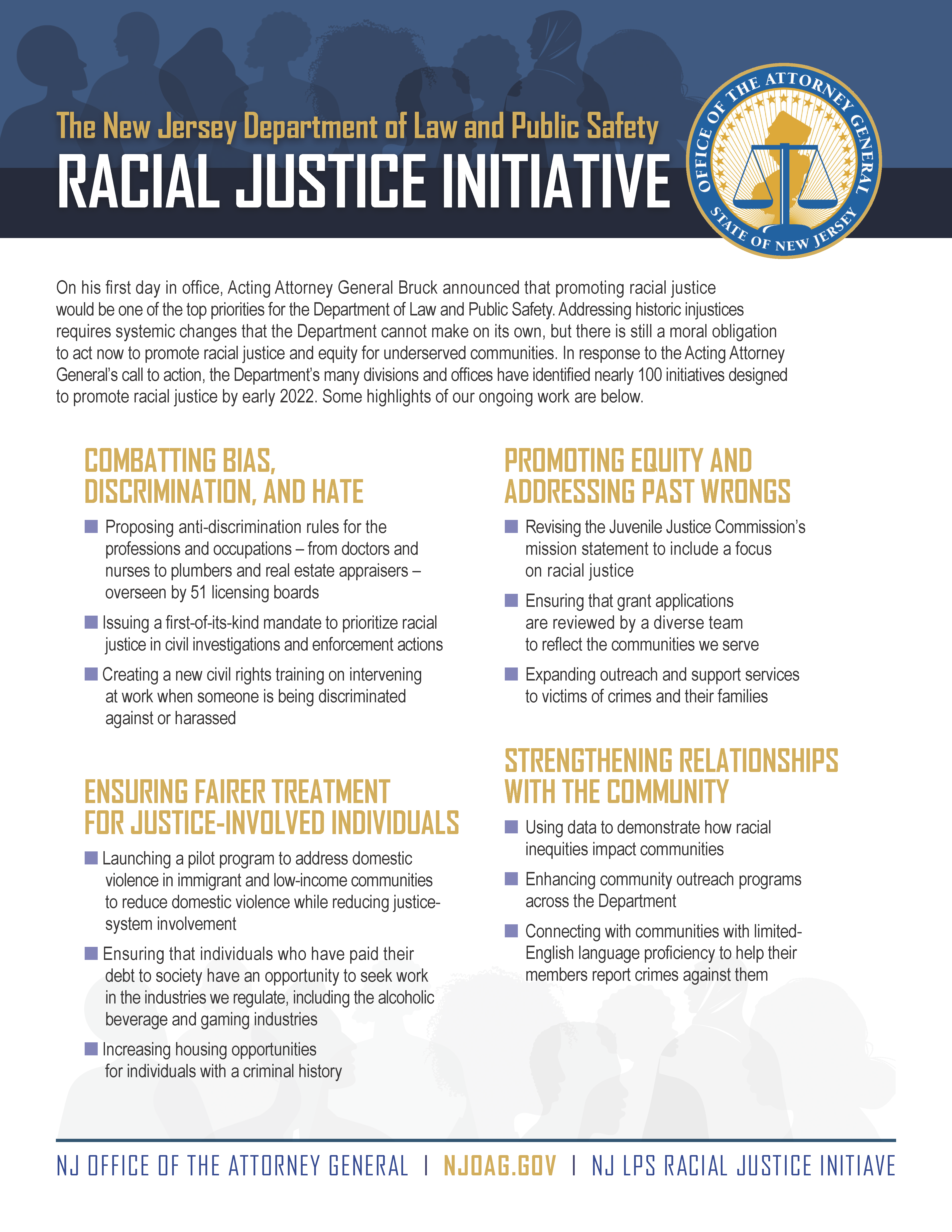 TRENTON – Acting Attorney General Andrew J. Bruck today announced an expansive package of initiatives to use the broad reach of the New Jersey Department of Law and Public Safety to promote racial justice throughout New Jersey. The package includes a number of significant policy changes, including rulemaking to root out discrimination among New Jersey’s 720,000 licensed professionals and a directive to prioritize racial justice through civil investigations and enforcement actions.

In July 2021, on his first day in office, Acting Attorney General Bruck directed the Department’s 17 divisions to identify specific projects to advance racial justice that they could complete using their existing authorities in the next six months. Today’s announcement provides the first public summary of the projects underway across the Department as part of the “LPS Racial Justice Initiative,” which Acting Attorney General Bruck identified as one of his top priorities in office.

“While the Department of Law and Public Safety cannot fix longstanding racial disparities and injustices on its own, we have a moral obligation to use the tremendous reach of the department to achieve the maximum impact in promoting racial justice,” said Acting Attorney General Bruck. “I’m grateful that the leaders and staff of our many divisions have fully embraced this crucial initiative. The programs announced today underscore Governor Murphy’s commitment to pursue racial equity for all New Jerseyans, and we’re proud to take on this important work in our department.”

“I’m proud that our office is advancing this important, department-wide initiative for the benefit of New Jersey’s residents,” said Lora Fong, Assistant Attorney General and the Department’s Chief Diversity, Equity, and Inclusion Officer. “Each of our divisions has responded to Acting Attorney General Bruck’s directive with a sharp focus on how our systems and services can be more inclusive and equitable, and is committed to taking specific steps and swift action.”

“The LPS Racial Justice Initiative is an important step forward in strengthening and expanding our community engagement efforts across the state,” said Bryn Whittle, Senior Counsel to the Acting Attorney General and Director of Community Engagement. “By establishing this as a priority across the department, we are sending a strong message to our stakeholders that we are dedicated to promoting and advancing racial justice and equity in underserved communities. I appreciate Acting Attorney General Bruck’s vision and leadership on this significant issue.”

In response to Acting Attorney General Bruck’s call to action, the Department’s divisions and offices proposed a total of nearly 100 new initiatives designed to advance racial justice and equity for underserved communities. The initiatives—which rely on the Department’s enforcement and regulatory authorities, community engagement, grantmaking, and other tools—include initiatives in the following areas, among others:

Highlights of the racial justice initiatives being pursued by the Divisions include:

In addition to the package announced today, the Department of Law and Public Safety is continuing its ongoing efforts to promote racial justice in other ways. The Office of Public Integrity and Accountability recently completed a sweeping overhaul of the state’s use-of-force policy to address police conduct that disproportionately affects communities of color and to require regular analysis of racial disparities going forward. The Division on Civil Rights is finalizing rules to implement the historic Fair Chance in Housing Act, which is focused on dismantling systemic racial disparities in access to housing. And all New Jersey State Troopers, as well as all prosecutors and detectives employed by the Division of Criminal Justice and 21 County Prosecutors’ Offices, have received implicit bias training.

The need for action was underscored by the COVID-19 pandemic, which exposed and exacerbated racial disparities that have long plagued our country and New Jersey. To cite just a few examples, Black infants in New Jersey are four times more likely than white infants to die in their first year; people of color make up approximately 44 percent of New Jersey’s population, but represent over 75 percent of the state’s prison population; and among New Jersey’s Asian American Pacific Islander population—which makes up 10 percent of the State’s total population—36 percent have limited English language proficiency, adversely affecting employment, earnings, and access to services.