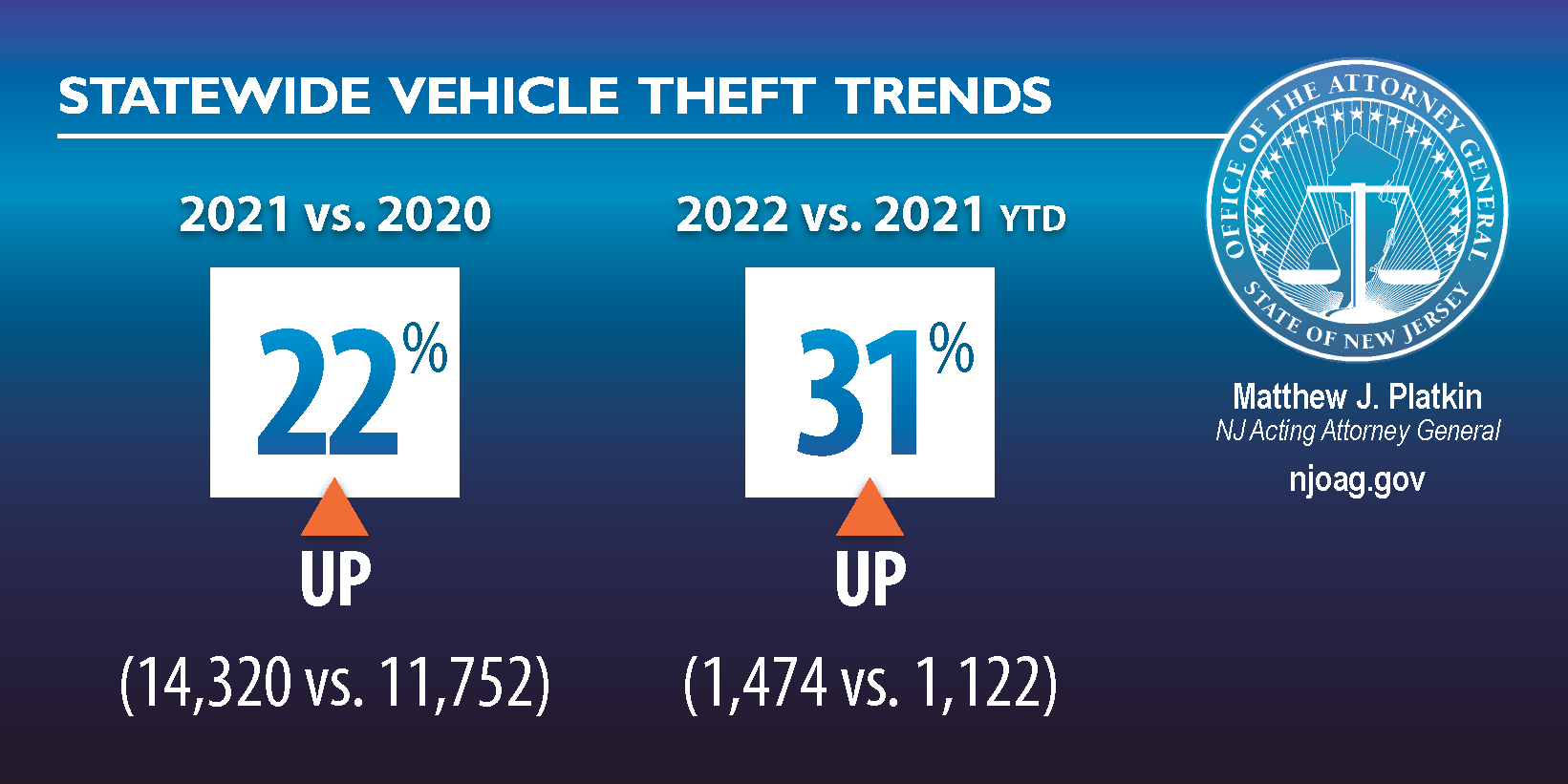 TRENTON – Acting Attorney General Matthew J. Platkin and New Jersey State Police Superintendent Colonel Patrick J. Callahan today warned residents about a serious spike in motor vehicle thefts across the state, while noting that stolen vehicles are frequently used to commit other violent crimes. To address this growing concern, the New Jersey State Police and Division of Criminal Justice are expanding the Auto Theft Task Force by adding additional detectives and prosecutors, as well as bringing on board additional police departments from around the state.

In addition, Acting Attorney General Platkin is also making available up to $125,000 in federal Justice Assistance Grant (JAG) funds to bolster resources and capabilities for the Task Force, including law enforcement personnel and equipment purchases. Through increased overtime reimbursements for assigned law enforcement members, the Task Force will be able to expand its scope and coverage.  JAG funds can also be used to procure automated license plate readers to enhance its operational capacity, helping Task Force personnel to more quickly identify criminal actors and take them off the street.

As crime rates rise around the country, Acting Attorney General Platkin’s focus on the increase in auto theft and related crimes in New Jersey is a reflection of his and the Department of Law & Public Safety’s commitment to and prioritization of reducing violent crime in the state.

According to data from the New Jersey Regional Operations & Intelligence Center (ROIC), auto theft is up 31 percent in the state’s so-called CorrStat Region, which represents more than 80 municipalities in northeast New Jersey along the Route 21 corridor, including Newark. This area accounts for 63 percent of the state’s total motor vehicle thefts.

However, car thefts are happening all over New Jersey, in the suburbs as well as larger cities. In January of this year, municipalities including Monroe, Edison, Franklin Township (Somerset County), Ocean Township, Oceanport, and Hamilton Township (Mercer County) reported motor vehicle thefts with subsequent burglaries into victims’ residences. The offenders associated with these crimes often have violent and property crime-related criminal histories and connections to violent gangs. This adds to the growing concern over the connection between auto theft and more serious crimes like shootings and robberies.

According to the State Police, the vast majority of auto thefts involve vehicles stolen when the key fob is left in the vehicle or the vehicle is left running. These incidents are commonly referred to as “crimes of opportunity.” Thieves may commit several vehicle burglaries before finding a vehicle with a key fob to steal. Criminals use simple techniques— shared among car thieves via social media or by word of mouth—to steal vehicles and disable factory navigation systems.

“Motor vehicle theft is a growing public safety issue that can lead to dangerous and even deadly confrontations between thieves and their victims, bystanders, or law enforcement officers,” said Acting Attorney General Platkin. “Expanding the Auto Theft Task Force demonstrates our commitment to reversing this trend while advancing our goal of apprehending criminals, recovering vehicles, and preventing violent crime. Reducing violent crime is a top priority for me, and we will do everything in our power to curb these thefts and keep our neighborhoods and residents safe. Meanwhile, we implore residents to not make it easy for car thieves by leaving a key fob in your car—not even for a moment—because your stolen vehicle could be used in the commission of a violent crime.” 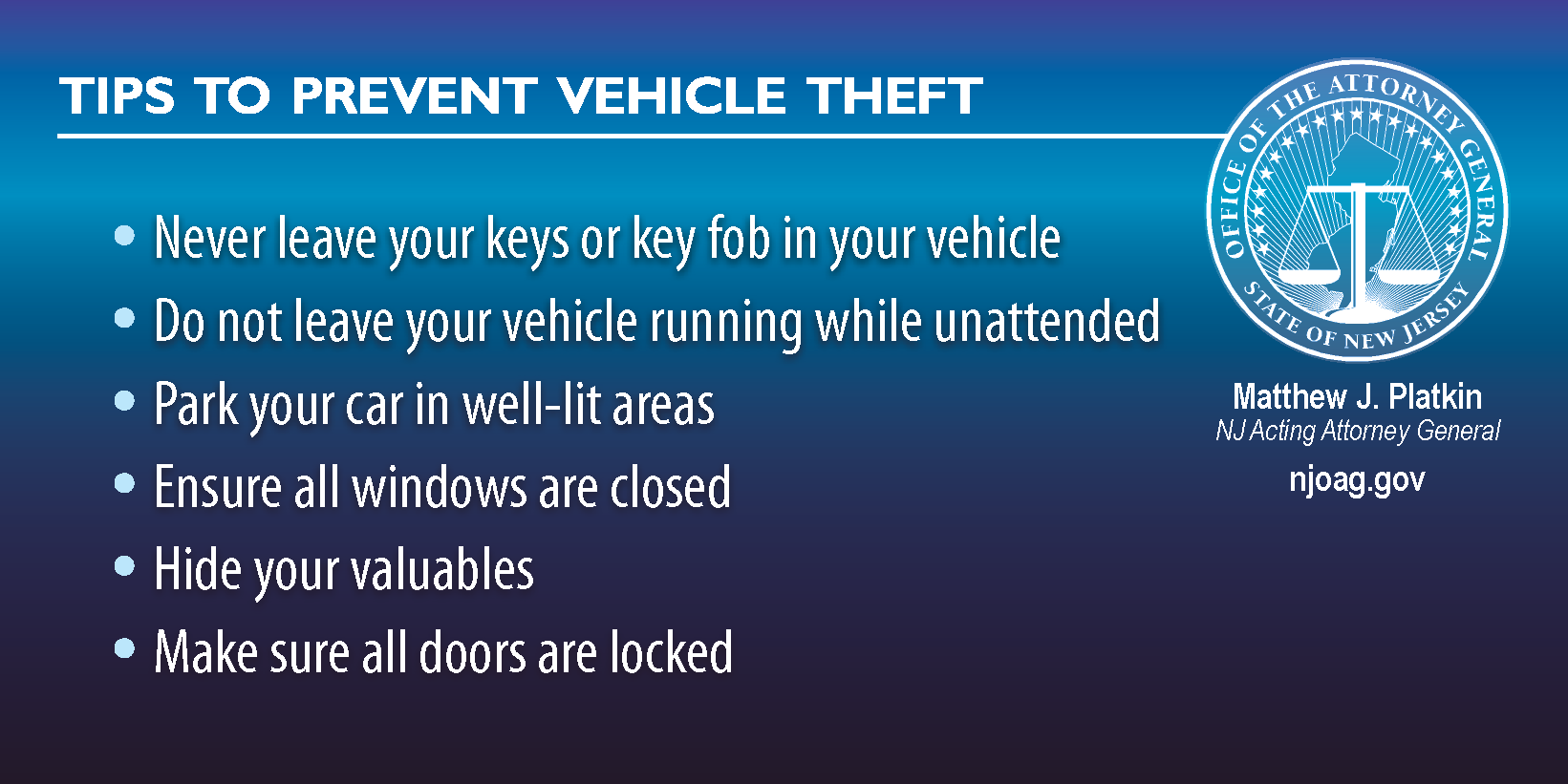 “The New Jersey State Police has been dedicated in our efforts to curb this growing trend but the increase in motor vehicle thefts cannot be denied,” said Colonel Patrick J. Callahan of the New Jersey State Police. “The public has to realize this is a very real and very dangerous problem that has implications far beyond the initial theft of a vehicle and carries into the realm of violent crime. The technological resources at our disposal have allowed us to identify key trends and target offenders but to avoid becoming a statistic yourself, secure your vehicle and take the key or key fob with you.”

“Auto theft is a growing factor in violent crime across New Jersey,” said Director Lyndsay V. Ruotolo of the Division of Criminal Justice. “While auto thieves are continuously evolving and adapting their techniques, we too are committed to adapting our approach and collaborating with all of our law enforcement partners to investigate and aggressively prosecute these crimes.”

“Auto thefts have been increasing substantially throughout the State in recent months, and have a ripple effect on other, violent crimes in which stolen cars are frequently used,” said Burlington County Prosecutor Scott Coffina, President of the County Prosecutors Association of New Jersey. “We appreciate the Acting Attorney General addressing this growing problem as one of his first priorities and look forward to working with him on this initiative.”

To address the growing number of motor vehicle thefts, the New Jersey State Police established the Auto Theft Task Force. Since its inception in 2015, the task force has continued to expand and is currently comprised of 16 members, six of which are Task Force Officers (TFOs) from six partnering agencies, including the Division of Criminal Justice (DCJ) and the Westfield, Warren, Bernards, Middletown, and Paramus police departments. The Task Force is currently in the process of expanding to include new assets, with the potential to expand further if circumstances warrant. In 2021, the Auto Theft Task Force conducted 33 vehicle theft investigations, made 75 arrests, seized five firearms, and recovered 130 stolen vehicles valued at approximately $5,690,000.

AG Directive 2021-10 established a statewide “Gun Violence Reduction Task Force” consisting of federal, state, and county prosecutors working together to identify cases for investigation and prosecution. The ROIC analyzes statewide arrests daily to determine which individuals arrested meet the criteria for enhanced prosecution for receiving stolen property/auto theft and committing violent crimes. The GVR Task Force model is based on the premise that a majority of gun violence incidents can be traced to a small group of individuals concentrated in specific areas—but that investigations into gun violence can span the entire state. AG Directive 2021-10 notes that “a vehicle stolen in Ocean County might be used as the getaway car in a Trenton shooting. By improving information-sharing across agencies, we improve our ability to solve crimes and hold wrongdoers accountable throughout the Garden State.”

In recent months, the Auto Theft Task Force and additional federal, state, county, and local law enforcement partners have been collaborating on efforts to reduce auto theft and violent crime across New Jersey. Most recently, the task force and its partners have worked together on the following cases:

The top vehicles stolen statewide so far this year include Honda Accord, Jeep Grand Cherokee, Honda CR-V, BMW X5, and BMW 3-Series. Thefts of high-end vehicles (newer vehicles with sticker prices of $50,000 and up) have risen dramatically over the past year. In the CorrStat region, thefts of high-end motor vehicles increased 127 percent from January 31, 2021 to January 31, 2022. Year-to-date thefts of the following high-end vehicles have increased significantly compared to 2021; BMW X6, Land Rover Range Rover Sport, Audi Q5, and BMW X3. 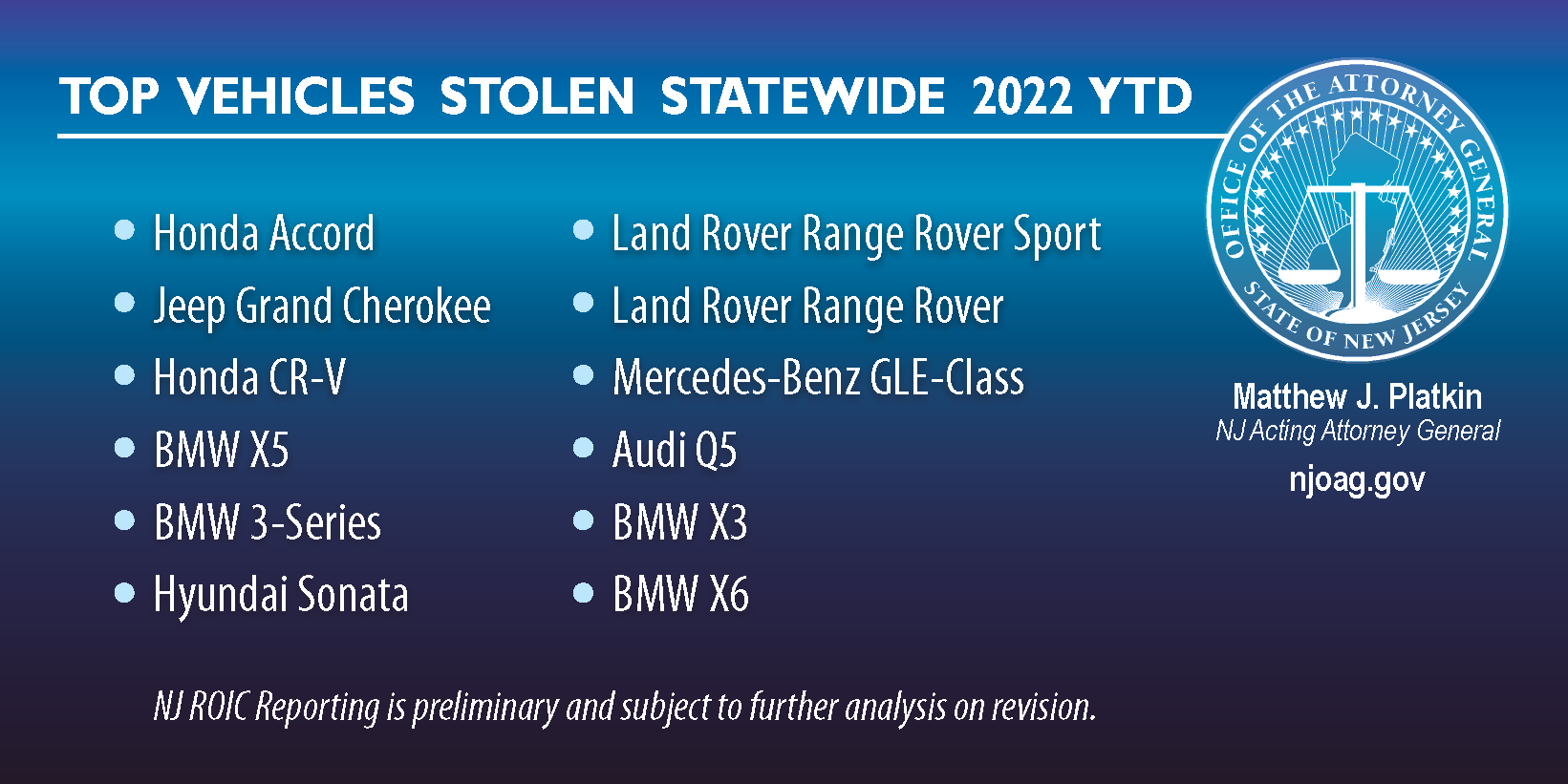 According to law enforcement, public awareness is a crucial part of preventing auto theft and the crimes that come with it. In addition to following the common sense tips listed above, you can ensure you are prepared in case your vehicle is ever stolen by remembering your license plate number and activating the account for your factory installed tracking system. Most manufacturers offer a free trial period and you can provide police the password to aid in recovery of your vehicle. In the event your vehicle is stolen, call 9-1-1 immediately, report the theft to your insurance company, and do not try to recover the stolen vehicle yourself.