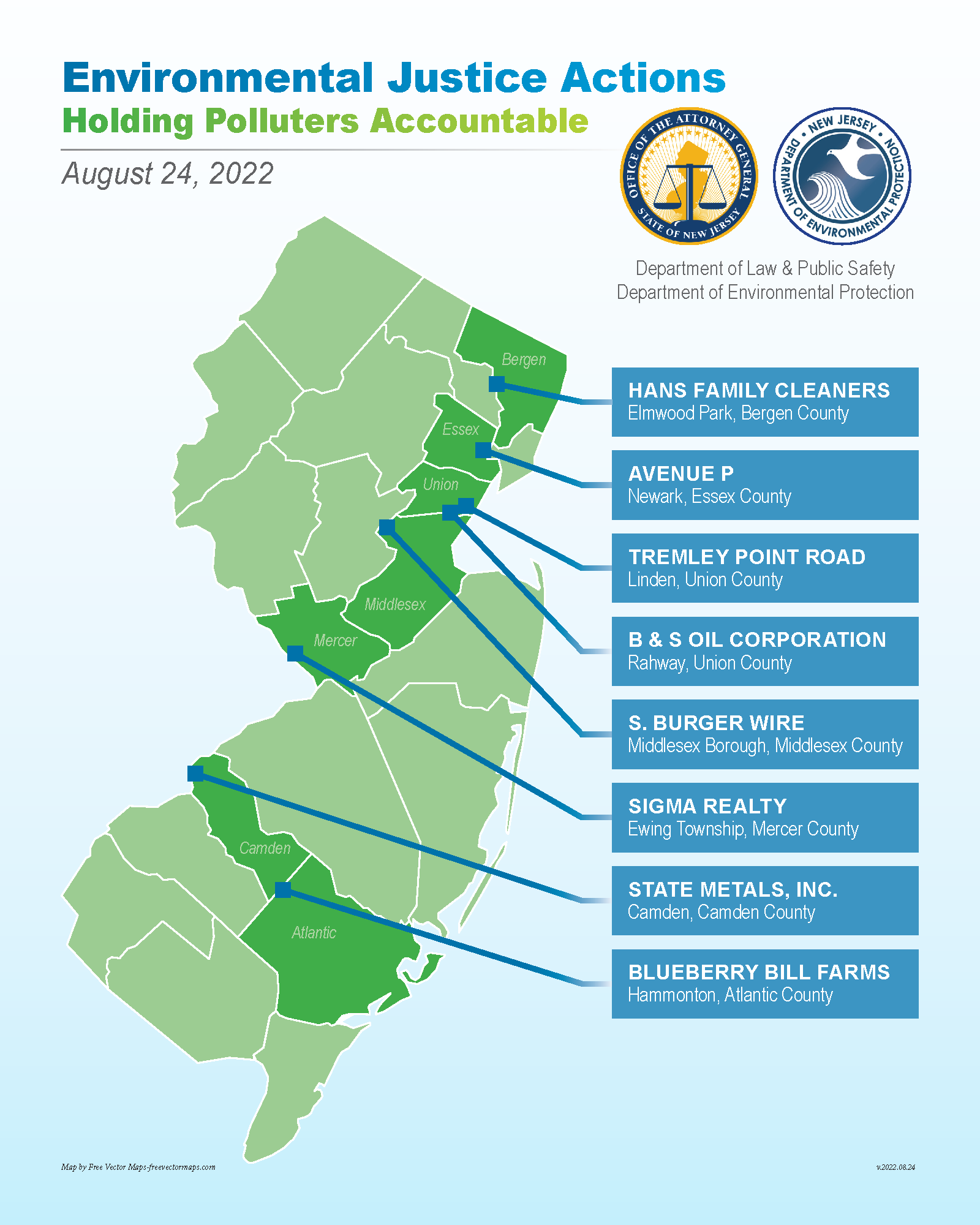 The seventh lawsuit filed today centers on a blueberry farm and blueberry processing operation in Hammonton that employs migrant farm workers who live on site. The farm owner allegedly has not complied with DEP orders to stop using four substandard, unsafe drinking water wells on the property, and also is alleged to be using two unpermitted septic systems.  Together with the lawsuit, the State also filed an application for an order requiring the farm owner to take immediate action – either shut down or stop using the wells for potable purposes, such as for drinking water or culinary purposes.

“Everyone, no matter where they are from or how they look, is entitled under our laws to live in an environment free from pollution,” said Acting Attorney General Platkin. “Pollution harms us all, but not equally. In New Jersey and across the nation, there is a shameful legacy of environmental injustice, but the Murphy Administration is committed to changing that here in New Jersey. Today’s enforcement actions are the latest example of that continuing commitment.”

“In New Jersey, we are confronting the historic injustices that have burdened low-income and minority communities with a disproportionate amount of pollution,” said Commissioner of Environmental Protection LaTourette. “Our commitment to furthering the promise of environmental justice sometimes demands that we take legal action to correct the legacy of pollution that underserved communities have endured. Lawsuits like those we are announcing today are an important message to polluters: treat every New Jersey community as though it were your own by leaving your neighbors and their environment better than you found them.”

Filed in New Jersey Superior Court, today’s six environmental justice lawsuits address a variety of environmental threats including the contamination of soil and groundwater, as well as the potential in some cases for harmful chemical vapors. Likewise, the pollutants at issue and violations of law vary from complaint to complaint.

In some cases, the contamination includes toxic solvents such as TCE (tetrachloraethylene), PCE (trichloroethylene) and PCBs (polychlorinated biphenyls) that resulted from metal degreasing, dry cleaning, textile processing, and other industrial and manufacturing operations.

In other cases, the alleged contamination resulted from former filling station operations that discharged gasoline, diesel fuel, and waste oil into the ground.

Other chemical pollutants mentioned in some complaints include benzene, toluene and xylenes, as well as such heavy metals as arsenic, lead, and mercury.

In one case, the environmental threat at issue involves the alleged stockpiling of contaminated fill at a former coal ash disposal site – including fill tainted with higher-than-permitted levels of polycyclic aromatic hydrocarbons (PAHs) and certain toxic metals.

All of the pollutants at issue in today’s lawsuits are believed to cause human health problems – including certain cancers, reduced heart and lung function, central nervous system disorders, kidney problems, neurological disorders, and reproductive issues including miscarriages and birth defects.

Including the lawsuits filed today, the Attorney General’s Office and DEP have filed a total of 52 environmental justice cases since 2018. To date, the lawsuits have yielded nearly $20 million in judgments.

Moreover, many of the cases have resulted in court orders requiring responsible parties to protect public health and the environment by remediating the properties at issue. Such orders are important fiscally as well, because they ensure that polluters –not New Jersey taxpayers – bear the cost of cleaning up harmful contamination.

Today’s seven complaints seek a variety of court-directed remedies, including clean-up of the tainted properties, payment to the State of civil penalties, compliance with administrative orders previously issued by DEP, and reimbursement to the State for the cost of site investigation, remediation, monitoring and other related work.

The seven lawsuits and single case settlement announced today include:

The State’s complaint centers on a contaminated industrial property spanning the 300-and-400 blocks of Avenue P in Newark near the Essex County Correctional Facility. According to the complaint, soil and groundwater at the site has been polluted with such hazardous substances as PCBs, benzene, toluene, xylenes, TCE, PCE, naphthalene, arsenic, lead, and mercury. Historically, the property was owned by various metal smelting and refining operators. Subsequently, it was acquired by a waste hauling business that used it as an illegal dump site for hazardous wastes it hauled on behalf of Sun Chemical Corporation and two paint company clients – Benjamin Moore & Company and Sherwin Williams Company.

According to the complaint, there were four documented discharges of gasoline and diesel fuel into the soil while the service station was still open for business. Exposure to gasoline and diesel fuel can cause dizziness, nausea, harm to internal organs and damage to cognitive functions. In 2015, the owners and operators entered into an agreement with DEP whereby they accepted responsibility for remediating the contamination. To date, the complaint alleges, they have failed to do so.

Through today’s lawsuit, DEP seeks an order compelling the defendants to remediate the site, and asks the court to impose civil penalties as a result of their violation of the agreement struck with DEP in 2015.

This complaint seeks to collect $597,000 in civil penalties owed to DEP for illegal dumping at a former coal ash disposal site earmarked for redevelopment on Tremley Point Road in Linden. The defendants are D.T. Allen Contracting Co., Dredge Management Associates, and the companies’ owners/managing members Greg Allen and Dan Allen.

According to the State’s lawsuit, the defendants violated the Solid Waste Management Act by dumping large amounts of contaminated fill at the 4050 Tremley Point Road site between 2015 and 2018.

The fill was supposed to be “clean” fill for use in capping and containing mounds of coal ash once disposed of on the property. Instead, the defendants allegedly imported massive amounts of contaminated fill in violation of the law, as well as in violation of DEP directives.

Among other things, the tainted fill contained elevated levels of polycyclic aromatic hydrocarbons (PAHs), along with lead and arsenic. In 2016, DEP issued two Notices of Violation against the defendants.

In 2018, DEP and the defendants signed an Administrative Consent Order (ACO) designed to resolve the matter. However, the complaint alleges, the defendants subsequently sold the property and walked away without meeting their remediation obligation under the ACO. In 2021, DEP issued a formal Demand for Stipulated Penalties seeking to collect the $597,000 owed by the defendants. The defendants never responded, and to date have never paid the agreed-upon penalties.

The State’s four-count complaint centers on soil and groundwater contamination at an industrial property located on Lincoln Boulevard in Middlesex Borough. Among other contaminants, the pollutants at issue include PCE, TCE and cis-1,2-dichloroethene. The complaint lists as defendants two corporate entities – 277 Lincoln Holdings, LLC and 277 Lincoln Boulevard, LLC – as well as the responsible corporate officers for both entities.

From approximately 1956 through 2003, the complaint notes, S. Burger Wire and Tubing, Inc. manufactured fine round metal wire and tubing on the site. S. Burger halted operations in 2003. Soil and groundwater contamination were detected on the site in 2003 and 2004, and in 2005, the entity 277 Lincoln Holdings, LLC entered into a Remediation Agreement with DEP and purchased the property. In 2018, a vapor intrusion evaluation of neighboring properties was undertaken, and it found traces of PCE and TCE in soil gas vapor samples taken at one nearby home.

Today’s lawsuit alleges that 277 Lincoln Holdings, LLC entered into a prior agreement with DEP in which Lincoln Holdings agreed to clean up the contaminated property, but failed to do so. Likewise, the lawsuit alleges that a successor owner of the property – 277 Lincoln Boulevard, LLC – also entered into an agreement with DEP (in 2019) to remediate the site, but failed to honor its commitment.

The complaint alleges violations of the State’s Spill Compensation and Control Act and the Industrial Site Recovery Act, and seeks additional penalties against both 277 Lincoln Holdings, LLC and 277 Lincoln Boulevard, LLC for failing to meet their clean-up obligations under prior agreements with the State.

Today’s complaint notes that the tainted property is located near a high school, a child care center, and a creek, presenting both environmental and public health concerns that have not yet been investigated. Through its lawsuit, the State seeks to enforce a Final Order it issued against Sigma in 2020. The Final Order requires Sigma to fully investigate and clean up the North Olden Avenue site and pay outstanding fees. The complaint also seeks imposition of additional monetary penalties against Sigma for failing to comply with the Final Order.

The State’s three-count complaint centers on a PCE-contaminated property on Grove Street in Elmwood Park that was the site, over a period of approximately three decades, of three different dry-cleaning establishments. The lawsuit names as defendants the three dry cleaning businesses, as well as a total of three sets of past and current property owners.

Prior testing of sub-slab soil gas, indoor air, and soil and groundwater samples by a private consultant revealed excessive concentrations of PCE. Follow-up testing by DEP confirmed concentrations of PCE above DEP standards. In 2021, DEP issued a formal directive to the responsible parties instructing them to clean up and remove hazardous substances discharged at the site, but according to the complaint, none of the parties has complied and the PCE contamination remains.

Today’s lawsuit alleges violations of the State’s Spill Compensation and Control Act and Brownfield and Contaminated Site Remediation Act, and also contains counts of unjust enrichment and negligence. Among other things, the complaint calls for remediation of the property as well as payment of outstanding fees, and asks the court to impose civil penalties as well.

This six-count complaint involves a Hammonton blueberry growing and processing operation where migrant farm workers are employed, and housed, while tending to the blueberry plants and harvesting the fruit. At issue in the lawsuit are four allegedly substandard, unsafe drinking water wells that represent a violation of New Jersey’s Well Construction and Maintenance Regulations, as well as alleged non-compliance by the farm owner with a related DEP Administrative Order issued earlier this year. That order directed owner-operator William A. Mortellite to halt use of the substandard wells, which DEP contends are not constructed according to potable well standards and are too close to septic tanks and discharge fields on the property. (The migrant housing facilities on site use wells for drinking water, as well as for sanitary and cooking purposes.)

Today’s complaint seeks a court-ordered shutdown of the four allegedly unsafe wells, as well as a shutdown of two unpermitted septic tanks currently in use on the farm.  DEP also filed with the complaint a motion for a preliminary injunction seeking an order requiring that Defendants immediately stop using the unsafe wells for potable purposes due to the risks to migrant farm workers and their families using the wells for drinking water, cooking and cleaning, and other potable purposes.  Defendants in the case include owner-operator Mortellite, as well as the corporate entities Booper, LLC and Blueberry Bill Farms, Inc. Alleged violations of law include violation of New Jersey’s Water Pollution Control Act and Safe Drinking Water Act.

Under this settlement, aluminum recycling and manufacturing facility operator State Metals, Inc. has agreed to pay DEP a penalty of $40,720. State Metals has also corrected a number of violations previously flagged by DEP including citations related to plant emissions in violation of its operating permit, leaks from damaged equipment, stack test failures and the processing of raw materials other than aluminum at its facility on 2nd Street in Camden City.