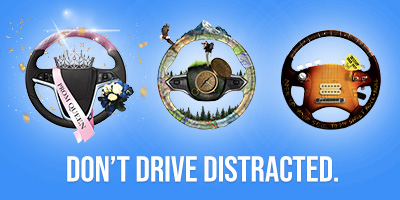 TRENTON – Kicking off National Distracted Driving Awareness Month, Acting Attorney General Matthew J. Platkin and the Division of Highway Traffic Safety (HTS) today announced the results of a 2021 study that found at any given time, one in five drivers on selected high-crash corridors in New Jersey were driving distracted. The study, commissioned by HTS and conducted by Rowan University, also provided insight into distracted driver behavior and identified key factors that contribute to it.

“Distracted driving kills people – it is that simple. And these deaths are entirely preventable,” said Acting Attorney General Platkin. “As part of the Murphy Administration’s focus on the safety of all New Jerseyans, we are stepping up education and enforcement efforts throughout the State and calling on drivers to do their part and remain alert and focused at all times behind the wheel.”

Distracted driving has long been a leading cause of crashes in New Jersey. Data shows that driver inattention accounted for more than half of all crashes recorded in the state from 2011 through 2020, and for nearly a third of fatal crashes during that period – outpacing speeding and drunk driving as a contributing factor in traffic deaths.

“Distracted driving continues to be a serious problem in New Jersey,” NJDOT Commissioner Diane Gutierrez-Scaccetti said. “Drivers are responsible for their actions behind the wheel of a vehicle. Please put the phone down and eliminate other driving distractions so the focus can be on driving safely.”

To better understand and address the problem of distracted driving, HTS – through the Center for Research and Education in Advanced Transportation Engineering Systems (CREATES) at Rowan University – commissioned a study to look beyond crash statistics to provide a broader picture of the distracted driving problem in New Jersey.

The study focused on six corridors in New Jersey with high incidents of distracted driving crashes: US1, US9, US130, I-80, US22, and the Garden State Parkway, and on four other important arterial and interstate roads in the State: I-295, I-95, NJ18, and NJ55.

During the spring and summer of 2021, researchers traversed nearly 15,000 miles on the 10 roadways in a vehicle mounted with cameras on both sides to observe, record, and document distracted driving in real time.

Key findings of the study include:

“While the overall findings of the Rowan Study paint a bleak picture, the information gleaned from the study provides us with important insights that will be used to develop strategies for addressing and mitigating distracted driving through enforcement and education,” said Eric Heitmann, Director of the Division of Highway Traffic Safety. “Combatting driver inattention is a top priority for HTS, especially during National Distracted Driving Awareness Month, when we join states across the nation in raising awareness of this problem and cracking down on violators.”

The launch of the “Destiny 2.0” public awareness campaign today builds on the success of the original Destiny campaign that featured colorfully decorated steering wheels to remind drivers of what is uniquely important to them and what is at stake every time they get behind the wheel. The high-profile campaign, which launched in April 2021, generated more than 70 million impressions.  “Destiny 2.0” features updated images to hammer home the message that maintaining focus on the road today helps ensure drivers get to where they going in the future. The new ads will appear in public spaces throughout the state, as well as on the internet and radio. For more information on the “Destiny 2.0” campaign, go to njsaferoads.com/destiny.

Also getting underway today is New Jersey’s annual “U Drive. U Text. U Pay.” distracted driving enforcement campaign. During the campaign, which runs through April 30, police departments across the state join law enforcement agencies nationwide in a targeted crackdown on drivers who text, talk on a cell phone, or engage in similar conduct that takes their focus off the road.

It is illegal in New Jersey to operate a motor vehicle while using a handheld electronic device. Violating this law subjects motorists to fines of $200 to $400 for a first offense and could increase to $800 with the addition of three insurance points in subsequent violations.

To assist with New Jersey’s “U Drive. U Text. U Pay.” enforcement efforts, HTS has provided 202 law enforcement agencies throughout the state with grants totaling $1,600,800 that pay for saturation patrols during the month-long campaign.

Last year, the “U Drive. U Text. U Pay.” campaign resulted in 8,014 citations for cell phone use/texting and 4,346 for careless driving. In addition, participating police agencies issued 6,151 speeding citations and 2,944 citations for seat belt violations.