Gangs have been reported in every county in rural, urban, and suburban areas. Click on the document pictured at right to view results of the 2017 New Jersey State Police Statewide Gang Assessment. 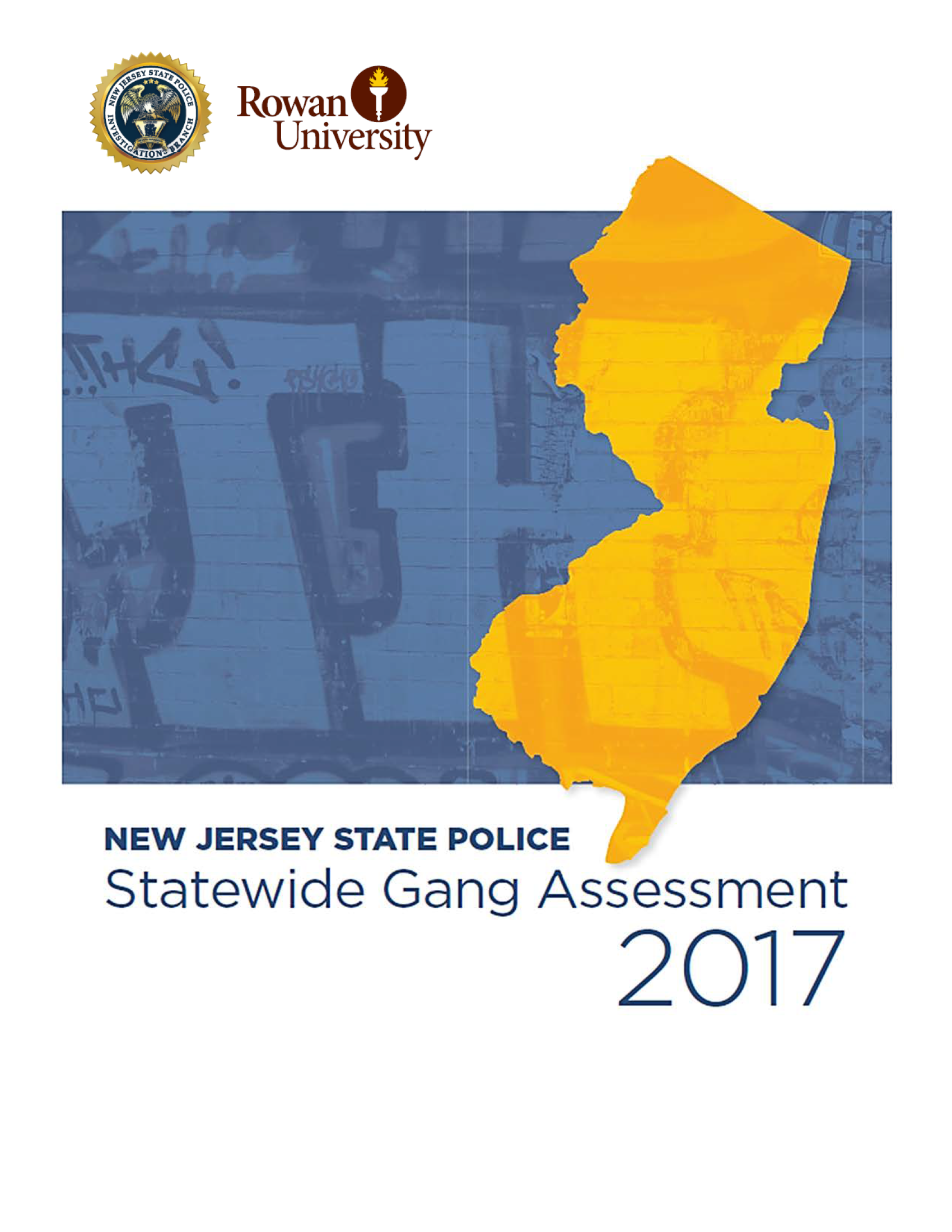 WHY DO YOUTH JOIN GANGS?

Forces of “pull”
We often think youth are coerced into a gang, but in most cases this is not true. Youth are drawn to gangs because they provide social opportunities, such as:

Forces of “push”
Youth often get pushed into a gang because:

When asked, youth reported that the following reasons (in order of importance), for joining a gang:

Children and adolescents form starter gangs to introduce themselves to gang culture (i.e., distinctive attitudes, jargon, rituals, and symbols). In some areas, established gangs sometimes create cliques or sets composed of younger youth call “wannabes,” “juniors,” “pee wees,” and the like (vigil, 1993). Where members of starter gangs may engage in minor delinquent behaviors, gang members may be involved in serious and violent offenses.

Colors: While some gangs have reduced their use of spe-cific colors to avoid identification by law enforcement, many gangs still use one or more colors as a symbol to represent themselves. These colors may be worn on shirts; bandanas; multicolored or single-colored beads; and belts, hats, shoes, shoelaces, hair bands, and jewelry. These col-ors may also appear in other possessions such as school supplies and room decorations.

Graffiti: Gangs use graffiti to mark their territory, brag about their reputation, mourn fallen friends, and threaten or challenge rival gangs. For this reason, graffiti can be very dangerous and should be removed as soon as possible. Youth who are engaging in graffiti may have items such as spray paint, spray-paint plastic tips, wide– tipped markers, or sketchbooks with graffiti works in progress. They may also have paint on their clothing, backpacks, or other items.

Sports Items: Letters, colors, or symbols associated with professional sports teams may have specific gang meanings in local street gang culture. Sports apparel may be pur-chased in nontraditional colors to correspond with a gang’s colors or may be altered with graffit

Symbols and Numbers: Symbols and numbers have special significance within the gang culture. Common symbols of some of the large gangs in the United States include starts (five– and six– pointed), crowns, pitchforks (pointing up or down), three dots in a triangle, and numbers. These charac-ters do not have the same meaning across the country, and the symbolism varies regionally. Contact your local school resource officer or other law enforcement representative to get specific information on the meanings of unidentifiable symbols or numbers you may see in your area.

Social Media: The internet has provided a new medium for gang communication and promotion. Social media Web sites, such as Facebook, Instagram, Twitter, YouTube and others allow gang-involved individuals to represent their gang affiliation, taunt others, post threats, and organize and promote their gangs’ activities. Social media escalates the potential for violence, since it reaches such a large audience.

Tattoos: Gang-related tattoos are used to show affiliation, rank, crimes committed, racial and ethnic allies, and loyalty to a gang. These tattoos often include the names, initials, or symbols of a specific gang and may be found on the hands, neck, face, chest, back, or arms.

Clothing and Apparel: Gang-involved youth may dress a specific way to identify with a particular gang, set, clique, or crew. This might include clothing or bandanas worn only in certain colors; pants worn well below the waist; gang-themed T-shirts with pictures of gangs, prison scenes, graffiti, or slogans; two– or three– toned bead necklaces; or colored fabric belts, occasionally with metal buckles that bear the initial(s) of the gang. However, gang clothing trends change and are often different from one place to another, so clothing alone may not be enough to indicate a youth’s affiliation with a particular gang.

Gang-Influenced Music and Movies: Gangsta/gangster rap is a style of rap music characterized by violent, tough– talk-ing lyrics that glorify street-gang culture. Popular movies also focus on street gangs and their activities. Youth may show their interest in gangs through fascination with music and movies that portray street-gang culture. However, interest in these types of entertainment alone may not be enough to indicate involvement in a gang.

Hand Signs: Some gangs use specific hand gestures and handshakes to communicate their affiliation with the gang, to issue threats or challenges to rival gangs, or to communi-cate in code when authority figures are present. These gestures can be known as “throwing up” or “stacking.”

What to Look For 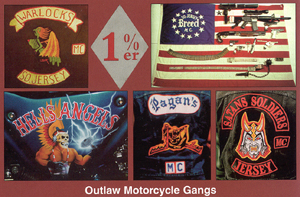 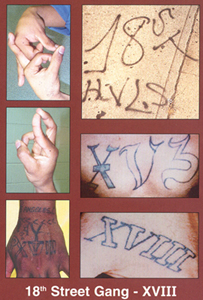 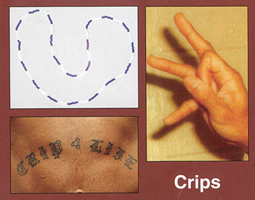 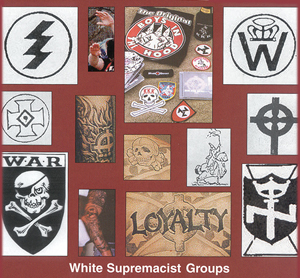 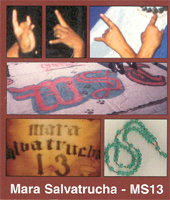 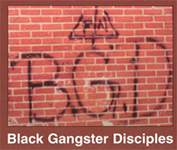