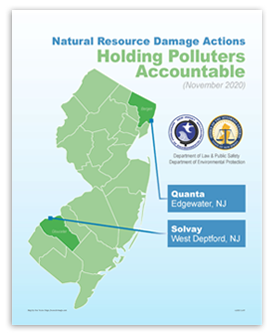 The first suit is against Solvay Specialty Polymers USA, LLC and Arkema Inc., two companies responsible for widespread contamination from toxic per- and polyfluoroalkyl substances (PFAS)  emanating from a Gloucester County facility, which has contaminated public drinking water in the region. The second lawsuit, against Honeywell International, Inc., seeks to restore natural resources damaged by contamination from the Quanta Resources Superfund Site along the Hudson River in Edgewater, Bergen County.

New Jersey has led the nation in environmental and public health research and regulation to protect the state’s residents from the harmful effects of PFAS chemicals like those manufactured at the Solvay site in West Deptford. PFAS substances – also called “forever chemicals”– are manmade substances desired for their ability to repel water, oil and fire, and were commonly used to make products like Teflon and Scotchgard. Highly resistant to environmental degradation and known to accumulate in the human body, PFAS are associated with serious adverse health effects such as cancer. The chemicals are also known to negatively impact the immune system and decrease vaccine response.

Despite DEP’s urging, for years Solvay has been slow to take responsibility for the PFAS contamination it has spread throughout the region. With respect to serious public health concerns, like impacts to public drinking water, Solvay has been disregarding the damage and risks to the public.

Today’s complaint seeks to compel Solvay to promptly and thoroughly investigate and remediate the extent of its pollution, protect drinking water sources, and restore natural resources damaged by the hazardous substances that Solvay continues to release into the state’s environment, including into our air, surface water, and groundwater, and to publicly disclose information regarding the health and environmental impacts of its operations.

In addition to PFAS contamination, the complaint alleges that Solvay and prior owner Arkema, Inc. are responsible for contamination from such “conventional” pollutants as volatile organic compounds (VOCs), polychlorinated biphenyls (PCBs), and numerous metals at the property and into the Delaware River.

The State’s second filing today seeks to hold Honeywell, as the survivor corporation to various predecessor companies that ran industrial operations, accountable for discharges of vast quantities of contaminants into the ground and water at and near a site now known as the Quanta property along the Hudson River in Edgewater.

Among other things, the complaint seeks the award of clean-up costs to the State and compensation for NRDs resulting from decades of coal tar processing operations at the 15-acre site, as well as the manufacture of paving and roofing materials, and use of the site for waste oil storage and recycling. All operations were halted at the Quanta property in 1981.

Under the law, NRDs are defined as damages for injury to, destruction of, loss of, or loss of value of natural resources. NRDs usually include the costs incurred to assess specific natural resource damage done. Under the law, the State is trustee for all natural resources, which in New Jersey are seen as surface and ground water, sediments, wetlands, and biota (living creatures other than humans).

“As we said at the outset of the Murphy Administration, the days of free passes and soft landings for polluters in New Jersey are over,” said Attorney General Grewal. “The corporations we’re suing knew full well the potential harms they were inflicting on our environment, but chose to forge ahead anyway. When companies disregard the laws meant to protect our environment, they can expect to pay.”

“Solvay cannot be allowed to continue to release toxic PFAS chemicals into the environment while leaving the public in the dark about the risks of their practices,” said Commissioner McCabe. “While we always prefer to work with responsible parties to take voluntary measures to address threats to public health, Solvay’s steadfast refusal to accept responsibility for its scientifically-documented impacts to both the health of its neighbors and the environment in West Deptford and the surrounding areas, has left the Department with no choice but to proceed with today’s filing. New Jersey’s new PFAS regulations, which are informed by some of the nation’s best research, establish strong public health protections. Today, with the Attorney General, we proudly lead the way in taking strong legal action against those who violate those protections.”

Arkema, Inc., of King of Prussia, Pennsylvania, produced chlorofluorocarbon (CFC) refrigerant gases at the Gloucester County site in the 1970s and in the 1980s manufactured industrial plastics and coatings using PFAS compounds. Solvay Specialty Polymers, of Alpharetta, Georgia, purchased the site in 1990, and began producing industrial plastics, coatings and other chemicals there, also using PFAS compounds. In addition to its historic PFAS releases, Solvay continues to utilize and release “replacement” PFAS known as chloroperfluoropolyether carboxylates (CIPFPECAs) into the environment.

The State’s complaint alleges that Solvay has discharged “tens of thousands of pounds of PFAS compounds” into the environment, exposing New Jersey’s natural resources to harm and threatening the health of nearby communities and shows high concentrations of PFAS compounds, such as perfluorononanoic acid (PFNA) and perfluorooctanoic acid (PFOA) in the air, surface and ground water on and near the Solvay property.

Specifically, a 2007-2009 survey found PFNA in the Delaware River water near the Solvay site at a concentration that was the highest reported concentration in surface water in the world at that time. Similarly, the levels of PFNA found in the nearby Borough of Paulsboro’s water supply in 2014 were higher than had ever been reported in drinking water elsewhere in the United States or the world. These findings and the Department’s allegations are also backed by U.S. Environmental Protection Agency (EPA) studies.

The complaint alleges that despite evidence linking the Solvay property to extensive PFAS contamination across Gloucester, Camden, and Salem Counties, Solvay “has refused to take full responsibility for the necessary investigation and remediation” and “failed to disclose the impact of their use and releases of PFAS into the environment” to DEP and surrounding communities.

Instead, Solvay has, despite significant evidence of its impacts and the fact it was the dominant user of PFNA in the area for decades, “repeatedly sought to blame other actors” for its wrongdoing and refused clear and repeated direction by the Department “to investigate all contamination pathways and pay for the treatment of all contaminated drinking water,” the complaint asserts.

In addition to PFAS contamination, there are excessive concentrations of VOCs, such as carbon tetrachloride and vinyl chloride at the Solvay site, and the groundwater is contaminated with a host of toxic metals. These include aluminum, antimony, arsenic, beryllium, chromium, cobalt, iron, lead, manganese, nickel and sodium, all of which have been detected at on-site levels which exceed state groundwater quality standards.

Honeywell, of Charlotte, North Carolina, is the successor to several entities that owned and operated industrial facilities at the Quanta property on River Road in Edgewater for more than a century.

In the early 1900s, the property consisted of a substantial chemical works that included tar tanks, a tar paper factory, an anhydrous ammonia factory (a byproduct of coal tar processing), and other facilities.  In addition, the waterfront along the Hudson River was fitted to receive barges and ships for delivery of raw materials, as well as for the shipping of finished products generated by various operations taking place at the site. The site was later used for storage and recycling of oil.

The Quanta Resources Corp. took over the property in 1980 and operated a waste oil facility there for approximately a year. At that point, DEP shut down Quanta’s operations after discovering extensive amounts of oil contaminated with PCBs and other hazardous substances on the property.

Sampling and analysis reveal that multiple hazardous substances exist in the groundwater, soils, wetlands, sediments, surface water and other ecological resources in and around the Quanta site. Those contaminants include: arsenic, asbestos, benzene, chromium, lead, PCBs, total petroleum hydrocarbons and other volatile organic compounds.

In addition to the State’s own actions, the EPA previously placed the Quanta site on the National Priorities List.

Noting that contamination caused by past unlawful discharges remains on the property and continues to migrate off site, the State’s complaint against Honeywell explains that hazardous substances and pollutants discharged have been found “well outside” the physical boundaries of the Quanta tract – including within the Hudson River, where human consumption advisories have been issued relative to many species of fish.

Specifically, the Quanta property continues to release “heavy end coal tar product” into the Hudson River, and a plume of coal tar creosote – designated by the federal government as a probable human carcinogen – exists beneath the property, as well as several adjacent properties, and extends into the Hudson.

The lawsuits against Solvay, Arkema, and Honeywell are only the latest NRD complaints filed since Attorney General Grewal and Commissioner McCabe declared a “new day” for environmental enforcement early in the administration of Governor Phil Murphy. These lawsuits have historically recovered millions of dollars to compensate the people of New Jersey for their losses, money that is then reinvested into the affected communities and resources.

The three NRD lawsuits filed in 2018 were the first such cases filed by New Jersey in a decade. Those lawsuits, which are still pending, involve the Pohatcong Valley Superfund Site in Washington Township, Warren County; the former Hess petroleum refinery in the Port Reading section of Woodbridge; and the Deull Fuel site in Atlantic City.

In 2019, the State filed more lawsuits against some of the country’s largest companies for polluting New Jersey’s natural resources and failing to clean up their mess. The State filed four actions against E.I. DuPont de Nemours over the pollution at four current or former factories, the Pompton Lakes, Parlin, Repauno, and Chambers Works sites. Meanwhile, the State took ExxonMobil to court over the pollution at its Lail property in Gloucester County. And the State also took action against companies responsible for selling toxic chemicals in firefighting foam; against Handy & Harman Electronic Materials Corp. for pollution in Montvale; and against The Sherwin Williams Company due to pollution in Gibbsboro, Voorhees Township, and Lindenwold.

These actions have motivated responsible corporations to approach the DEP in an effort to voluntarily resolve their past damages to the State’s natural resources without the need for costly, time-consuming litigation. Most recently, Wyeth Holdings LLC, the owner of the American Cyanamid Superfund site in Somerset County, agreed to a $4.2 million settlement to compensate the public for natural resource damages through open-space preservation and natural-resource restoration projects that protect and enhance the Raritan River watershed. As with today’s filings, it is only after these efforts fail that the State is left with no other option but to litigate.

Photographs of the Solvay and Honeywell sites at issue in the lawsuits announced today are available at:

For the most recent information about the DEP, follow its Twitter feed at @NewJerseyDEP or visit www.nj.gov/dep