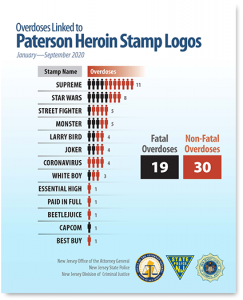 TRENTON, N.J. – Attorney General Gurbir S. Grewal and New Jersey State Police Superintendent Colonel Patrick J. Callahan today announced arrests of seven men and the seizure of illegal drugs worth $580,500 in the takedown of a major fentanyl and heroin mill in Paterson, N.J., which distributed its narcotics in wax folds stamped with the same brand names that have been linked to 19 fatal and 30 nonfatal overdoses across New Jersey.

On September 29, while investigating alleged drug activity in Paterson, detectives from the New Jersey State Police Trafficking North Unit, as a part of the New Jersey State Police Opioid Enforcement Task Force, determined that an opioid mill was being operated out of a residence on West Railway Avenue.Detectives observed Javier Castro exit the residence carrying a plastic bag and depart in a Dodge Charger.He then traveled to Courtland Street where he met Kasine Forsey, who entered the Dodge and later exited with the bag, departing in a Honda Accord. Forsey was stopped in the Honda shortly after by the Paterson Police Department and was found to be in possession of 115 bricks (5,750 individual doses) of packaged opioids, which were inside the plastic bag.

During the operation, detectives observed several alleged drug transactions at or near the residence and initiated several motor vehicle stops, which resulted in the seizure of various amounts of drugs, paraphernalia, and cash before obtaining search warrants for the residence and the Dodge Charger. Troopers with the Trafficking North Unit along with members of the State Police T.E.A.M.S, K9, Gangs and Organized Crime North, and Hazmat Units executed the search warrants, which resulted in the seizure of additional narcotics and packaging materials.

Detectives recovered 38 different stamps used to brand packaged narcotics. Drug traffickers market their “brand” of drug by ink-stamping the outside of a wax fold with a unique image, word or phrase such as “Happy Hour,” “Supreme,” and “Beetlejuice,” which are examples of the stamps recovered.

As a result of the operation, the New Jersey State Police and law enforcement partners seized:

“The mission of the Opioid Enforcement Task Force is to save lives, because as we see time and time again in these operations, the brand stamps on the packaged heroin and fentanyl we seize are associated with numerous fatal and nonfatal overdoses,” said Attorney General Grewal.“By implementing a strategy that focuses on major suppliers of these deadly opioids, the task force maximizes its impact in protecting our communities and those struggling with addiction, and ensures that those who profit by selling these agents of misery and death are brought to justice.”

“The stamps seized in this investigation have been linked to 19 fatal overdoses and 30 nonfatal overdoses.By dismantling this mill, we cost this trafficking ring nearly $600,000 in profits, but more importantly, we prevented known deadly brands of drugs from being sold throughout our communities, undoubtedly saving countless lives,” said Colonel Patrick J. Callahan, Superintendent of the New Jersey State Police. “The Opioid Enforcement Task Force is designed to shut down the drug supply chain at its chokepoints, but our strategy will remain twofold. While we aggressively target narcotic manufacturers and dealers, we will continue to develop educational and community outreach strategies with our partners to combat the opioid epidemic that continues to ravage our communities.”

“Paterson is a major opioid distribution center for the region, and the evidence seized indicates that we shut down a large supply operation,” said Director Veronica Allende of the Division of Criminal Justice. “We will continue to work with the New Jersey State Police to investigate those responsible for this deadly commerce and prosecute them to the full extent of the law.”

This investigation is part of a broader strategy being implemented by the New Jersey State Police Opioid Enforcement Task Force and the Division of Criminal Justice, which reflects a shift in how the state is investigating and prosecuting opioid cases.Investigations and intelligence show that, in some cases, a large number of overdose deaths can be traced back to a single source, often a supplier who indiscriminately mixes fentanyl with heroin.By focusing on identifying and shutting down these sources, the state is leveraging its resources to have a maximum impact in choking off the supply line of deadly opioids and reducing overdoses and fatalities.

Since 2018, the Attorney General’s Office and the New Jersey State Police have collaborated on groundbreaking initiatives focused on combating the opioid crisis. One of the major methods in tackling the opioid crisis has been to identify and disrupt chokepoints in the drug supply by neutralizing heroin mills across the state.

Attorney General Grewal and Colonel Callahan thanked all of the agencies participating in the Opioid Enforcement Task Force and all of the other agencies that assisted with this investigation.

This case is being prosecuted by the Division of Criminal Justice.